The Return of Hunter Pence 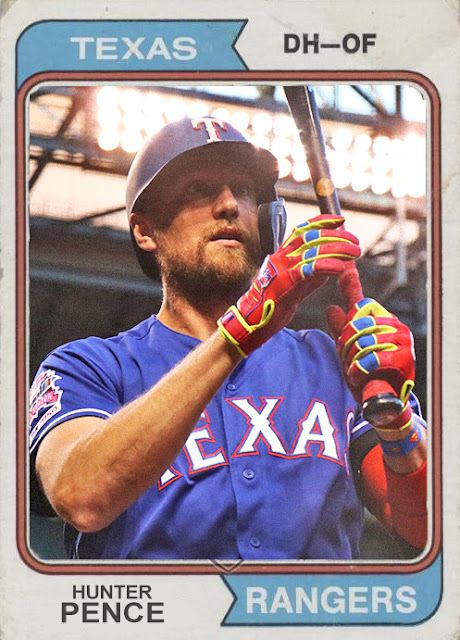 ...yes, I know he just got injured, but I'm not waiting til he gets off the DL to post this.

Hunter Pence has been one of my favorite players ever since suiting up for those Fightin' Phils back in the day. He had the type of attitude and drive that patched the hole that Jayson Werth had previously left, and helped them team become a (nearly) unstoppable force heading into the 2011 playoffs.

...then 2012 happened and he left to win two World Series wins. Which is fine.

What worried me for a whole with Pence is that he seemed like he'd settled into a role in San Francisco as the dilapidated, aging occasional power hitter, and it looked like he'd lost a few of his dimensions as an all-around player. At the end of last season, I resigned myself to the fact that it was probably the end of the road for him.

...and then the Rangers signed him, he made the team and revitalized his career. Which helped, I think.

Before leaving with an injury, Pence had been hitting .294 with 15 home runs and a 1.5 WAR, which is not a bad comeback season campaign at all. It also helps that Pence has been part of a relatively powerful lineup, with Joey Gallo, Shin-Soo Choo and Asdrubal Cabrera all successfully hitting for power. Adding Pence to the already building lineup was an insanely smart idea.

Heck, even the pitching is beginning to turn up. They've finally figured out a solid four-man rotation by keeping Mike Minor and Lance Lynn hot, adding Adrian Sampson and plucking Ariel Jurado from the bullpen. They've also made lemonade with the fact that Shawn Kelley's been wonderful in relief and nobody else is any good at closing, so he's working there.

The Rangers are in 2nd, and 8.5 games behind the Astros for first. This could easily turn into a 'well, somebody has to come in 2nd' kind of season, but I feel like the Rangers have enough to separate themselves from the rest of the pack, and stay semi-competitive (I mean, after all, they are over .500 and have a better record than other competitors like the Indians and Cardinals).

They'll get Hunter Pence back in a few weeks, and then I think we'll really see them go on a tear.

Coming Tonight: This man has gotten progressively worse and worse playoff luck, so let's see how he does on an NL Wild Card contender.
Posted by Jordan at 10:33 AM