Marte vs. The Okay 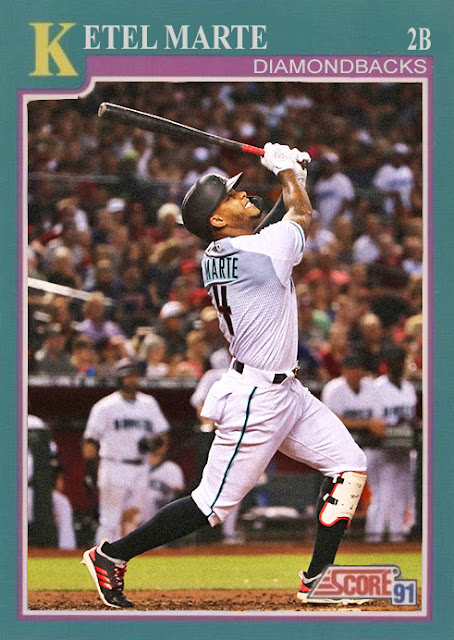 It's great. Every time that I think the D-Backs are finally for real, they lose 5 games in a row.

They must be timing these specifically for me.

I mean, the good news is the D-Backs can lose 5 games, and still be mired in the thick of the middle of the NL West. Like, the Padres will lose a few more games. They'll shuffle around again. And then in a month, when I have to write another D-Backs post, they'll be back in fourth, and the cycle will begin again.

At least the D-Backs have some genuine talent powering them this year, despite the numerous pieces sidelined for the majority of the year (Jake Lamb, Taijuan Walker, Steven Souza). For instance...Ketel Marte is gonna be a prickly little bench guy for the ASG team. He's got 20 home runs, which is already a career high for him, he's still batting over .300, and he's one of the main offensive highlights of this team. You all thought it was gonna be David Peralta struggling to sell tickets on his own, but Marte, Eduardo Escobar, Adam Jones and Chris Owings getting hot and keeping the team in the conversation.

And even if a few lesser arms are bringing the rotation down, the trio of Zack Greinke, Robbie Ray and Merrill Kelly are all fantastic right now, and keeping the team defensively strong. Greinke's on the way to another career year, which the D-Backs can only benefit from. And also, add Yoan Lopez to the canon of sneaky, fireballer relievers you've never heard of.

So despite this latest skid, there's still a lot about this Diamondbacks team that leads me to believe that we're not done with them. They could make a huge push after the ASG break, take 2nd and never let go. It's honestly a matter of how soon the rest of the roster can come alive.

Coming Tomorrow- Only in Toronto could this guy become a major star, man.
Posted by Jordan at 10:23 PM