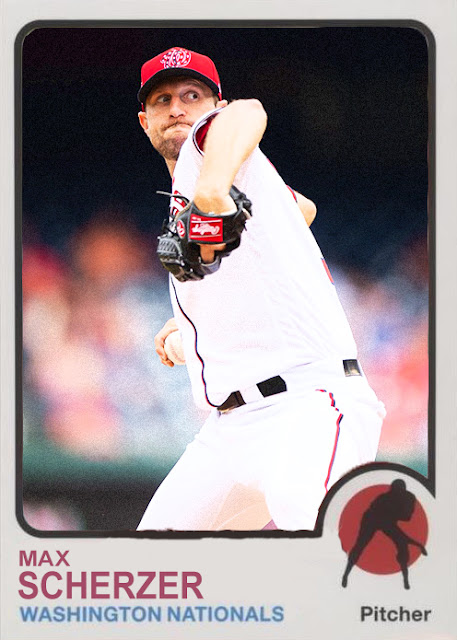 ...So we're just gonna gloss over the fact that Max Scherzer broke his nose in practice, then pitched a gem the next day with a black eye?

I mean, for Scherzer, it's just another postscript on his HOF plaque. Like there's any doubt that he's getting one. I mean, come on. At this rate, Scherzer will hit 3000 strikeouts and 200 wins before turning 37, he's come in the top 5 of Cy Young voting every year since 2013 (and in that interim has only seen his ERA rise above 3 ONCE), he's got 3 Cy Youngs, six going on seven ASG appearances, and he's saved this Nationals team from completely bottoming out. I know that people have always been fixated on Clayton Kershaw as our generation's ace, but if Kershaw is the Greg Maddux, then Scherzer might be the Randy Johnson. Kershaw has had human moments in the last few years. Scherzer hasn't had one since 2012.

The Nats, however, have had several human moments this year. The non-performances of Brian Dozier and Yan Gomes, the inability for any prospect to stay on the 40-man for more than five minutes (Kieboom, Stevenson, Noll...they've gotta keep waiting), the umpteenth injury to Ryan Zimmerman, the inefficiency of most of the bullpen (like, you know you're in trouble when your idea to spice up the 'pen is signing 42-year-old Fernando Rodney), and the inefficiency of Dave Martinez to manage the team out of tough spots. It's the final phase of the Nats' transition from contenders to rebuilders, and it's not looking pretty.

You look at the pitching, though, and...there's still some hope. Scherzer's here til 2021, Strasburg's here til 2023, and Corbin's here til 2024. Unless massive trades happen, this pitching staff is gonna stay pristine for a couple years. I just wonder if...by the time these contracts are up, will the Nats have another contending roster? Or will said contracts keep them from rebuilding completely.

Coming Tonight (?)- I might get the 2nd half of the SC break up, but next custom is a Royals pitcher, so excuse my lack of drive to post it as soon as possible.
Posted by Jordan at 11:13 AM