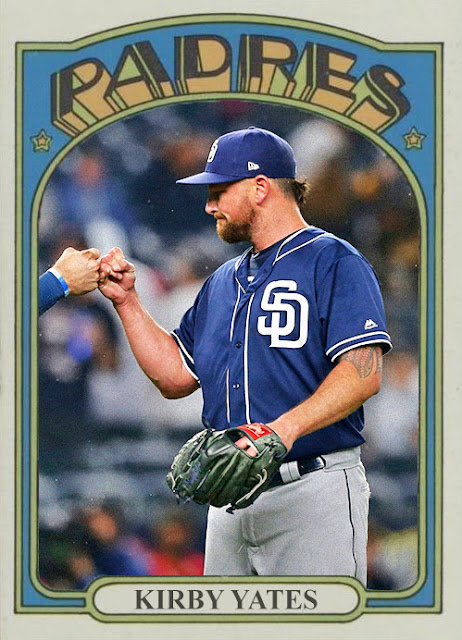 Once again, we roll out our recurring spotlight on closing pitching to talk about the guy who has the most saves of anyone in the MLB, San Diego's Kirby Yates.

Last year, this exact month, I wrote an ABC post about Brad Hand, who was doing the exact same thing for the Padres: closing a ton of games despite the team's general mediocrity. However, things have changed for the Padres. Instead of being a lock for last place, the Padres are now sort of a lock for fourth, with the D-Backs and Rockies a few wins ahead of them, battling for second.

Which is, if anything, an improvement.

I don't think there's a ton of comparison needed when talking about Yates and Brad Hand. Though I will say that Brad Hand is the type of closer whose abilities outweigh his team's: this is the second year in a row where he's been on the saves leaders list while playing for a team that's not in first, and whole the Indians are a lot better than the Padres right now, it's safe to say that their best days are behind them.

Yates, like Hand, came up as a middle reliever, switched teams a few times and eventually got handed the closing gig. And since taking over for Hand, Yates has been fantastic in the ninth, getting 12 saves in the last two months of the 2018 season, and having 23 saves so far this season. He's also a late bloomer, as he's 32 years old and just now reaching his potential.

...but it is quite a potential. Yates has a 1.24 ERA in 29 appearances, has finished a league-leading 28 games and has saved 23 of them. And since we're doing Hand comparisons, let's do the ratio: Kirby Yates has saved 67% of the Padres victories, comparative to Brad Hand's 60% this time last year.

So...is Kirby Yates a better closer than Brad Hand, or are the Padres just better now than they were with Brad Hand?

Honestly, I'm not sure. I have less stats to work with on Yates' side than Hand's, and Hand is still pitching beautifully in Cleveland, but it might just be the slight improvement of the San Diego offense. The games are still close, but the wins are more frequent. And it helps having Manny Machado, Fernando Tatis Jr. and a consistent Franmil Reyes in that lineup. Run support is nice for closers.

For now, let's just say that Kirby Yates is one of the best closers in the league right now, and if the Padres are, in fact, selling at the deadline, then he's gonna make a team very happy in the postseason.

Coming Tonight: Another piece of proof that the Pirates gave up too much in the Chris Archer deal last year.
Posted by Jordan at 10:10 AM