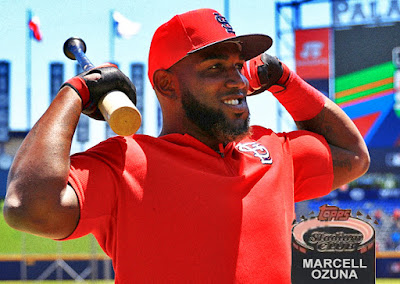 So, the Cardinals have had to rely on a lot more AAA players than they were thinking going into this season. However, unlike the Yankees, said players are not instantly MLB-ready and are boosting them to a steady lead.

No, these are the Cardinals we're talking about.

I mean, you have some unlikely players making big June splashes, like Daniel Poncedeleon, the guy who nearly had a no-hitter in his first start last year, who's got a 1.20 ERA in 3 starts...and is currently back in triple-A. They also finally called up longtime farmhand Rangel Ravelo, and he's...yeah, he's batting .167. There seems to be a silver lining in the fantastic start Tommy Edman has gotten off to (.364 in his first 7 games), but the fact that it took so many rookie call ups (Lane Thomas, Andrew Knizner, Drew Robinson) to get one that sticks says something about the farm system.

It also says something about the Cardinals in general, that they still require frequent call-ups even though a lot of sportswriters thought they'd be in peak Cub-clobbering condition by now. And while the Cards have carved out a generally solid lineup, the pitching isn't working. Dakota Hudson has the lowest ERA at 3.55, and he only has 54 strikeouts. Jack Flaherty is at least striking people out, but at the cost of more earned runs. And Wacha, Wainwright and Mikolas just aren't stopping runs this year. Even the OTHER pitching call-up, Giovanny Gallegos, hasn't done a great deal with his starting audition. Plus, the bullpen consists of a lot of people giving underwhelming numbers, as well as Jordan Hicks and John Gant trying not to succumb to them.

This is not the Cardinals team that's gonna get things done. There are too many flaws and injuries lying around for this team to dethrone Chicago or Milwaukee. It doesn't matter how many home runs Marcell Ozuna hits, or how well Paul DeJong plays, or all the little appendages Yadier Molina puts on his HOF plaque at this point. The Cardinals just don't have it.

All I'm gonna say is this. The Cards have been hit-miss after a series with Miami. The Reds have won five straight and are 2.5 games behind the Cards. The battle of the century may be coming very soon.

Coming Tomorrow- I've pushed this guy's custom twice now, and honestly I feel bad for him. So unless somebody else gets traded in the next few hours, expect the contact-hitting shortstop for an aggressively okay AL West team.
Posted by Jordan at 10:18 PM