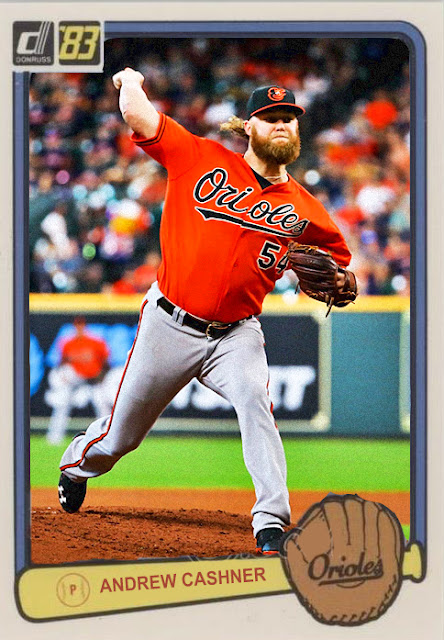 ...man, you know it's a dire year for the Orioles when Andrew Cashner, a guy who I usually don't have a reason to make a custom of until the Uncustomed Heroes bit in December, gets a custom in June. Like...he's a good enough choice, and it's a bad enough team, that he's a guy I can logically make a custom of...in June.

...then again, welcome to Orioles baseball.

I'd like to think that there are promising years ahead for the Orioles. Adley Rutschmann was just signed after drafting first overall for the team, and hopefully he's only a few years away. Also, looking at the minors, you do have people that could be ready soon, like power-hitting infielder Ryan Mountcastle, as well as guys like DJ Stewart and Chance Sisco who are just waiting for opportunities to break through the torrid lineup.

This team is less of a 'waiting for the contracts to expire' team (though it'd help if Chris Davis' did), but it's really just a team waiting for another substantial star to build on, someone like Machado or Adam Jones. They have Trey Mancini, and he's playing well, but I don't know if he's that guy. That's a guy I see batting eighth for a competitor in a couple years. He's not gonna be a marquee guy that saves a team.

And there really isn't much for the O's to do this season but just wave their good players round for other teams to eat up. Like, you look at someone like Jonathan Villar or Hansel Alberto, and you think 'how much longer is it gonna be before they get traded?' That's really where the O's are at.

I mean, it does help that Dylan Bundy and Andrew Cashner are pitching fairly well. It's better than nothing. But both of these guys would not be a substantial starting option on any competitive team. It's a sad reality we have to face with the O's, that maybe their best doesn't even compare to the 8th-bests of most competitors.

Coming Tonight: Not even a black eye and a broken nose can stop this guy.
Posted by Jordan at 9:42 AM