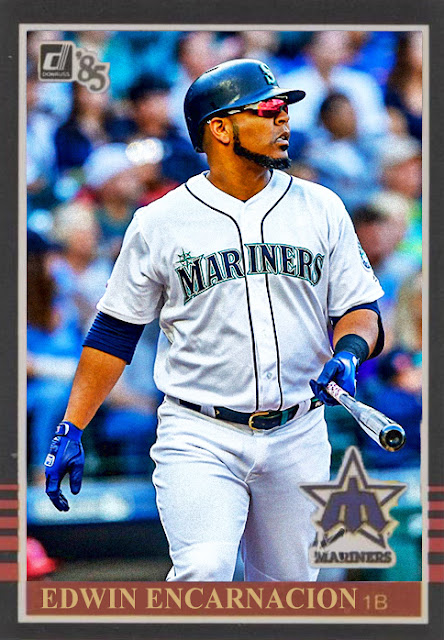 Funny how all of this has worked out for Seattle. They lose their two marquee stars, Robinson Cano and Nelson Cruz, and so they get a new hard-hitting outfielder, Jay Bruce, and a new hard-hitting first baseman/DH (Edwin Encarnacion), and now both of them are gone.

I'd say 'Poor M's fans', but that goes without saying at this point. They've lost two team heroes named Edwin in a span of six months.

Without Encarnacion and Bruce, the Mariners have...a few pieces left. Thankfully most of them are younger players, like Mallex Smith, Mitch Haniger and Daniel Vogelbach. Plus, JP Crawford is finally up in the majors, and (get this) he's HITTING! AAAAHHH.

All I care about is this: Do the M's have an outfield strong enough to carry on from losing Bruce? Well, right now Haniger is injured, so it's been a Smith-Santana-Mac Williamson outfield, and Williamson isn't hitting, so...maybe? Once they get Haniger back, this will be firmer. And do they have strong enough options at first and DH to carry on from losing Edwin? Well, their DH is Daniel Vogelbach, and they...don't accessibly have anyone who's ever consistently played first base except for Tim Beckham, who can't be too used to it. So...no.

The M's didn't get rid of Bruce and Edwin because they knew they'd be safe without them. This was a pure and simple salary dump, and a message to all teams that the M's, despite that insane start, are not competing. Not even remotely.

So, now that we've gotten that depressing business out of the way, let's talk about Edwin in the Bronx.

I love this move. I love it because Edwin is a much better DH than Kendrys Morales, he'll fill a steady hole at DH when Stanton gets off the DL, and he can jump in and swap with Luke Voit at first once or twice if his defense gets too scary. Edwin, despite being 36, is still in his prime, and is leading the AL in homers with 21 (SIDENOTE: I find it interesting that Seattle traded both Bruce and Edwin after they both hit a milestone home run; Bruce had just hit his 300th before joining the Phils, and Edwin just hit his 400th the other day). To say that Edwin will bolster the already powerful Yankee offense is an understatement.

He just needs to stay healthy. Because as great as a DH as he is, he's better off on the lineup than on the IL, and we have enough players on the IL. So I'm hoping for good, consistent things with Edwin.