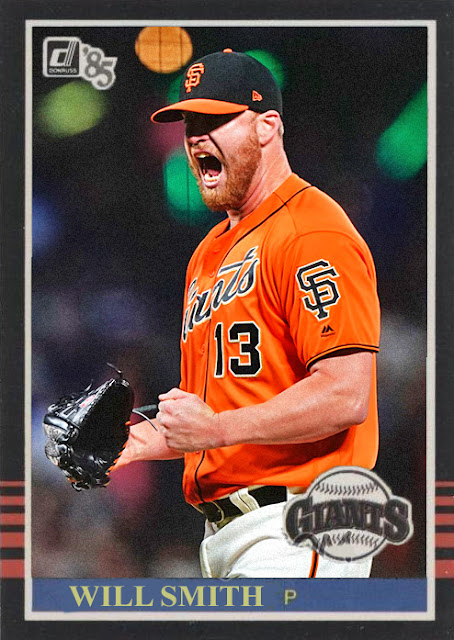 Dire stuff for the Giants. All the heavyweights from the title years are slumping, Sandoval's probably gonna get traded, and the only hope for the next month or so is a guy named after a sitcom star from the 90s.

This is the kind of bad team that has to rely on flukey roster additions to keep fresh. Right now, you have Mike Yastrzemski gunning for an outfield spot, Stephen Vogt being an alright backup catcher, and stellar bench turns from Donovan Solano and Alex Dickerson. The bench right now is essentially like the cast of a Celebrity Big Brother season. Anybody who's around for a few weeks, let 'em on.

With all the odds and ends with pitching right now, it helps that Will Smith is having a great season in the ninth, with 20 saves already, and a good chance of notching San Fran's sole ASG nomination. Smith is one of those guys who's showing versatility beyond the ninth, as he has 10 non-save appearances, but no blown saves. This is gonna work wonders for a team that needs relief pitching, but not a closer (Atlanta, perhaps?). I mean, Smith could pull a Heath Bell and survive the deadline, but...I doubt it.

And after Smith, Pablo and...probably one or two others leave at the deadline, where will that leave the Giants? Will they be able to reform the team into something that could compete in 2020? I...don't think so, but...look, if they wanna rid themselves of a bunch of contracts this offseason, that could help. I don't know if there's a substantial youth movement on the way, but...it's better than holding onto like 7 old guys that aren't playing well.

Coming Tomorrow- This guy must occasionally get tired of pitching for terrible teams. At least he's made a career out of it, though.
Posted by Jordan at 8:29 PM