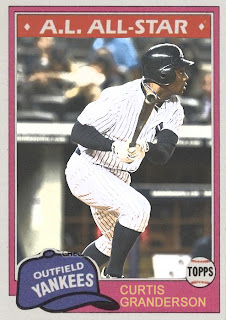 The 81 set is one of my favorites, and it has been since I was young. And whenever I'd customize from it, it'd always be pretty cool, because it's easy to do so. Granderson has been bashing home runs left and right for the Yanks, and he's looking pretty similar to a 1981 star, newly traded and young. Yeah, I can get away with comparing Dave Winfield to Curtis Granderson, right? Because they both started their careers with low playoff expectancy, then became big stars, then were traded to the Yankees, where they became bigger stars. Time will only tell if Granderson refuses to report to an expansion team, or if he makes the 500 home run club, but it'd be nice.

Tomorrow (?)- I haven't made any in a while, so I might churn out some more tonight.
Posted by Jordan at 6:52 AM
Labels: Curtis Granderson, Custom Cards, Yankees