When last we spoke of this legitimately insane contest, Captain Canuck's Braves were in the lead with 47 points. This is pretty far in the lead- the closest team to the Braves is the defunct Marlins, with 41. Still, anything can happen as we near the halfway point of this contest.

And the ripping continues: 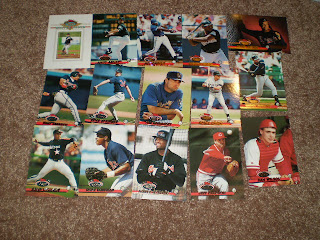 Pack 21:
Well hello there, it's a well-expired Master Photo giveaway card, of Greg Maddux of the Braves. Sure, the card is worth absolutely nothing, but it represents a pretty cool giveaway from less than 20 years ago. 4 points.
Andy Ashby of the Rockies. Double, dammit. 1 point
Joe Carter Members Choice. 1 point
Charlie Hayes of the Rockies. 1 point
David Justice of the Braves. 1 point
Tony Tarrasco of the Braves. 1 point
Russ Springer of the Angels. 1 point
Tom Brunansky of the Brewers. 1 point. Grrrrr...
Spike Owen of the Yankees. 1 point
Andre Dawson of the Red Sox. 1 point
Brian Williams of the Astros. 1 point
Dave Winfield of the Twins.1 point
Harold Reynolds of the Orioles, 1 point
Jeff Reardon of the Reds. FINALLY, A NEW CARD! 5 POINTS! JUST CAUSE!
Dan Wilson of the Reds. Looks like a Minor Leaguer. 2 points 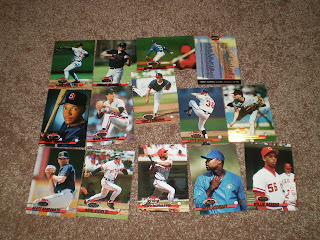 Ladies and Gentlemen, Pack 22 is yet another pack filled entirely with doubles. Even the checklist is a double. This makes me angry. All involved gets a point 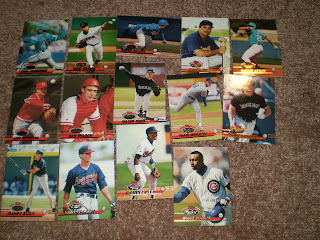 John Johnstone of the Marlins. Got it. 1 point
Bud Black of the Giants. Got it, 1 point
Frank Bolick of the Expos, 1 point
Matt Mieske of the Brewers. A nice spring training shot. 3 points
Richie Lewis of the Marlins. 1 point
Jeff Reardon of the Reds. 1 point
Dan Wilson of the Reds. 1 point
David Nied of the Rockies. Was big for Colorado in 93. Then the wheels fell off. 3 points
Todd Worrell of the Dodgers. A cool pitcher shot. 4 points
Dante Bichette of the Rockies. Possible after a strikeout. 3 points
Randy Bush of the Twins. The pre-swing ritual. 3 points
Chipper Jones of the Braves. This is very close to a Chippah rookie card. Also, it's Chipper Jones in his early days. Either way, it's a 5 pointer. The Braves had a lot of Star Power back in 93
Manuel Lee of the Rangers. A decent fielding stance. 3 points
Willie Wilson of the Cubs. Looks like he just hit a homer. 4 points 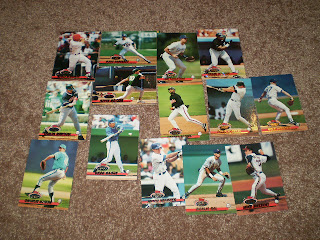 Tim Wallach of the Dodgers. 1 point

Steve Decker of the A's. 1 point

Carlos Quintana of the Red Sox. The swing...and most likely a miss. 3 points

Harold Baines of the Orioles. 1 point

Paul O'Niell of the Yankees. 1 point

Greg Hibbard of the Cubs. 1 point

Charlie Hough of the Marlins. 1 point

Greg Gagne of the Royals. 1 point

Mitch Webster of the Dodgers. 1 point

Bengi Gil of the Rangers. 1 point

Mike Bielecki of the Indians. 1 point. This was the only cards the Indians ever got in this box. A shame, too.

After an entire box of some base cards and a lot of crappy doubles. Captain Canuck's Braves still lead with 59. Nobody else is even close. Still, there's a box down, and one hopefully-better-collated box left to go. The contest continues tomorrow night.