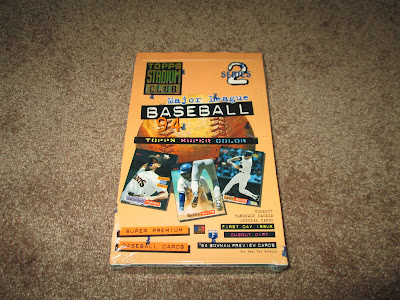 If somebody handed me a hundred dollars and told me I could only spend it on cards, the one thing I WOULDN'T do would be to spent it all on modern flagship. I mean, the wax of the 2000's and 2010's are fun, but they're not...fun to open, or fun to reminisce upon. That's why if I'm getting an older box of cards, I seek out a fun set, one I'm going to have a good time opening.

So, when I got a surplus of Amazon money over the holidays, I felt like I needed to get at least one Stadium Club box.

Why, exactly? I ripped two vintage boxes of Stadium Club two years ago. A box of 1993, and a box of 1996. I adored both sets, and enjoyed the quality, the photography, the design, and countless other things. And also, because Amazon sells them relatively cheap.

There were a few years' boxes up for grabs, but I figured that if I were getting Stadium Club, and if I were getting a FUN box, then I had to get a FUN design. And the 1994 design always spoke to me as a fun one, as it was so 90's it wasn't funny.

So, I bought the box, and it came in the mail last weekend. And I'm gonna open it with you all. I mean...I'm gonna open it, and you're gonna see what I got, via my crappy camerawork. 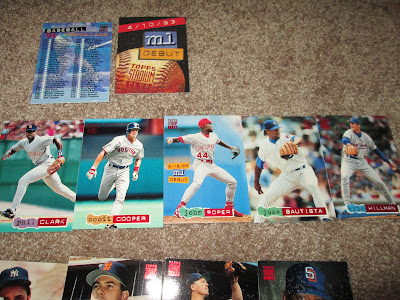 Pack 1-
For the record, when I display my findings, I'll divide them into three main categories- dummy cards, cards of people I've never heard of/doubles, and cards that, if I were collecting cards in 1994, I would put in my binder. There are a few notable rookies in this set, but they're not actual rookie cards. They are, however, damn close.
My discards here included Jose Bautista, Phil Clark, and Scott Cooper. 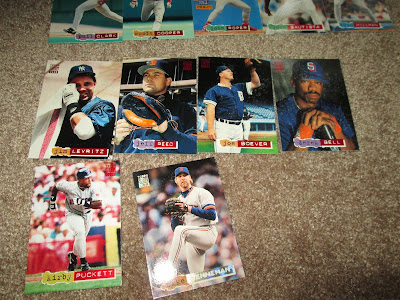 Also, I added a few shots of really nice photography, like Jeff Reed or Derek Bell. Our big star in this pack was Kirby Puckett, two years before his premature retirement. Our one-per-pack gold foil card is Mike Henneman. The gold foil cards should not, by any circumstances, be mistaken for first day issue cards, such as the mistake I made. 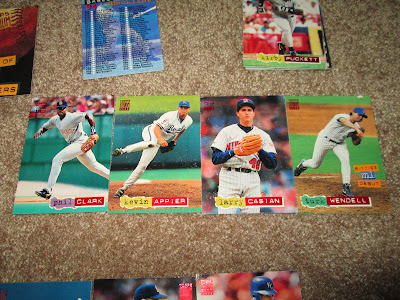 Pack 2-
Already we have our first double in Phil Clark. Exactly one pack in, as well. Also, a rookie card of Turk Wendell, which tells you how impressive the 1994 rookie class turned out to be. And I have indeed heard of Appier, I just think that photo is a bit boring. 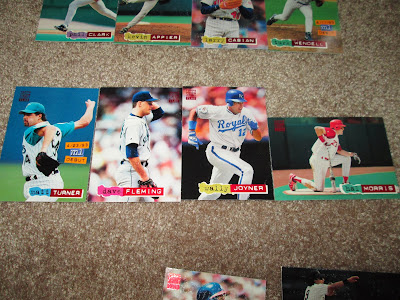 Wally Joyner was still a moderate star in 1994, as was Hal Morris. Meanwhile, Matt Turner is wearing one of my all time favorite baseball uniforms, the 1990's teal Marlins. I don't care that they're likely never going to wear them again. They're awesome. 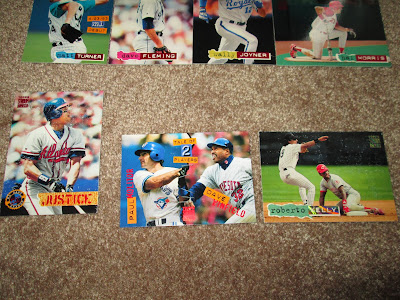 We have our first two inserts in this pack. Our first is of David Justice, exclaiming that he hit the most home runs in the NL in 1993, which means that the NL must have been pretty depleted in 1993. Also, there's a Tale of Two Players insert of two Hall of Famers, Paul Molitor and Dave Winfield. Dave would retire a year after this set, Paul would retire four years after this set. Also, a foil card of Yankee punchline Roberto Kelly. 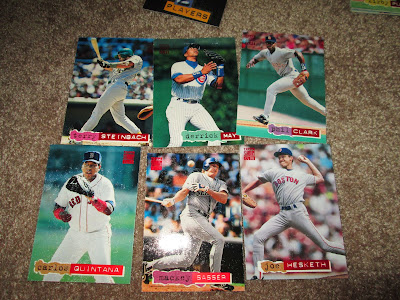 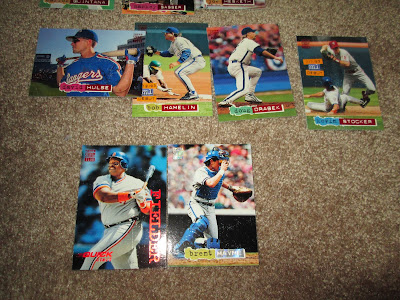 Bob Hamelin and Kevin Stocker are two people that were relatively big deals in 1994. Especially Hamelin, seeing as he won the Rookie of the Year this year, alongside Raul Mondesi who was a lot better than Hamelin, though that's not saying much. Also, I got a Cecil Fielder Quick Start insert. I personally wish his son had more time as a Tiger. 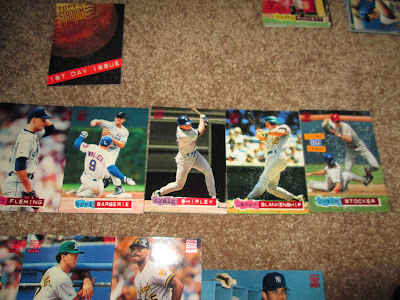 Pack Four-
Already you can see how the collation in this box is going to be. The collation is the one thing I don't miss about 90's boxes. 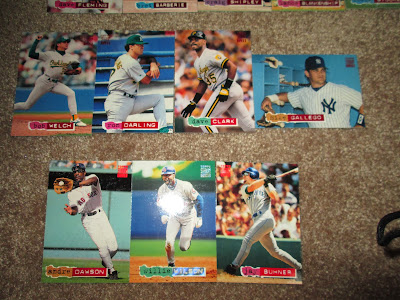 A few nice stars in Ron Darling, Bob Welch, Willie Wilson and Jay Buhner. Only surefire hit is Andre Dawson. I do not have enough cards of him as a Red Sock, too. 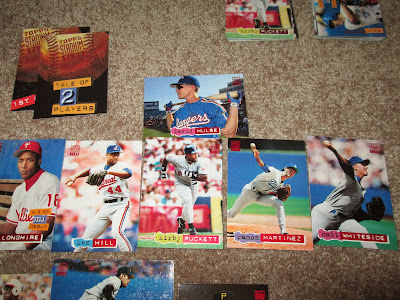 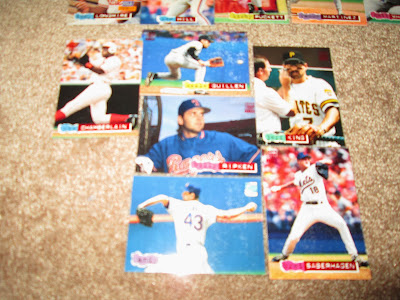 This photo didn't come out too great, but there's an awesome Ozzie Guillen, an awesome Wes Chamberlain throwback, and a nice card of Jeff King getting eye-black painted on. Best card has to be Bret Saberhagen, even if it's 90's, not-as-good-as-his-Royals-days Bret Saberhagen. 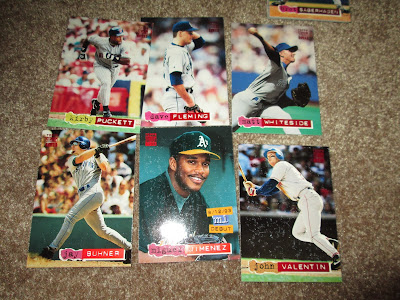 Pack 6-
Most amuzing of the boring shots of John Valentin, at the height of his 90's popularity. Basically, he's the Kevin Youkilis of the 1990's, without the slumping-in-the-Bronx part, or the last-minute-career-renaissance-in-Japan part. 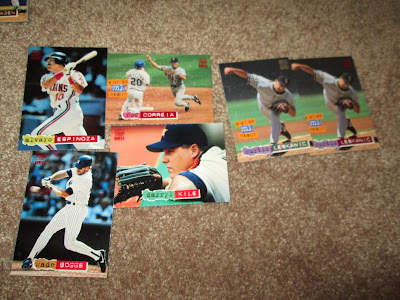 I got a rookie card of Curt Leskanic. -1 year old me would have been pleased with this, had there not been another Curt Leskanic rookie right behind it. Also, a nice shot of Darryl Kile. The pack MVP is obviously Wade Boggs. Take notes, Jacoby. This is how a Red Sock becomes a Yankee hero. 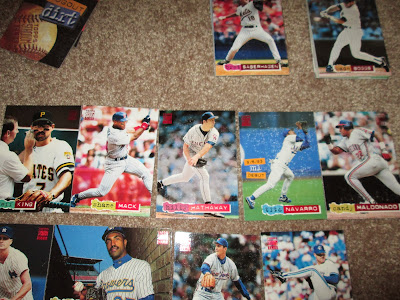 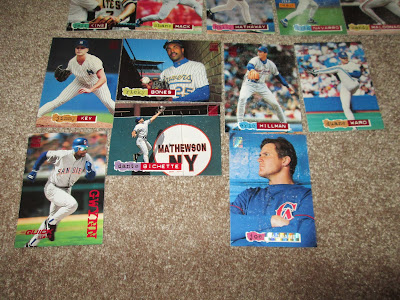 The highlights here are a very, very nice card of always-fantastic-on-cardboard Ricky Bones, a card of Yankee-flameout Jimmy Key, a Quick Start insert of Tony Gwynn, and an excellent shot of Dante Bichette, leaping against the monument of someone he will never be as good as. 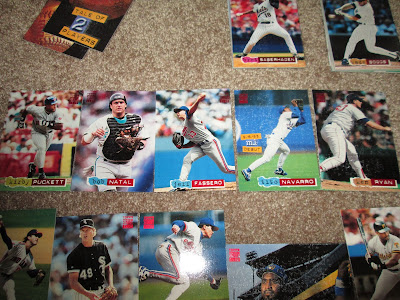 Pack 8-
The discards include Rob Natal, a Marlins catcher who I have never heard of. It's justifiable, too, because I honestly forget who's playing catcher for them now. 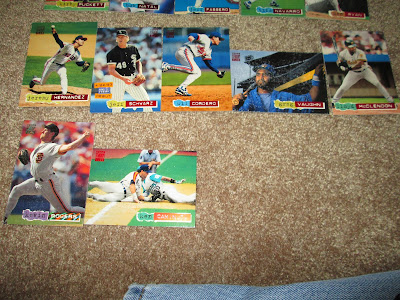 Nothing too special here, save for a roughed-up Greg Vaughn, and a really nice shot of Ken Caminiti.