Goodbye to a Great 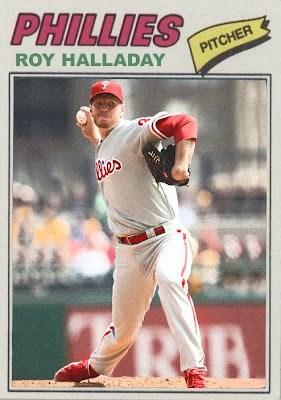 For a brief stretch of time, between 2010 and 2011, Roy Halladay was my favorite player.

There was no sugarcoating, no Yankees racing to the throne. Halladay was the king. He pitched 2 no-hitters in 2010, and still managed to be great in his four years with Philly. Even if he was a Blue Jay for most of his career, spending countless games battering down my Yankees, I came to respect him, and he became a favorite.

Last season was awful, because he sustained a pretty awful injury, which ended up cutting his Hall-of-Fame caliber career short. And that sucks, because if he had kept going there would be no 'borderline Hall' crap. There would be no 'oh, he'd be awesome had he not gotten injured' crap. If 2013 hadn't have happened, there would be 3 more seasons of Halladay pitching like a boss, and there wouldn't be any drama when he'd be inducted into the Hall 6 seasons after. Now, because his career ended early, all the haters are gonna bring that up, and that might keep him from getting in.

So yeah. Glad to see you're retiring with Toronto, Roy. Glad you ended on top.
Posted by Jordan at 4:44 PM