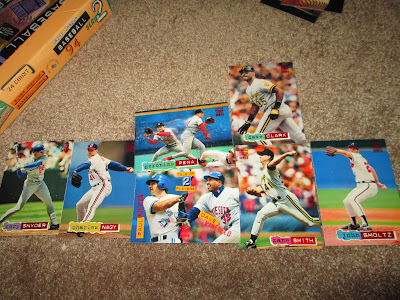 8 more packs of this box left to finish up today, and I'll say I had a lot of fun opening it. Any 90's Stadium Club box is a fun one, as they have a lot of great photography, plus a lot of effort was put into it back then, which can't be said for a lot of Topps products these days. Plus, even if there's crappy collation, and cards that stick together, it's a great nostalgia set, cause you can look at players like Wally Joyner, Bob Hamelin or Marty Cordova, and chuckle over the fact that they were popular once.

This pack, Pack 17, had a lot of doubles, plus a card of Cory Snyder, 10 seasons in and still awful. 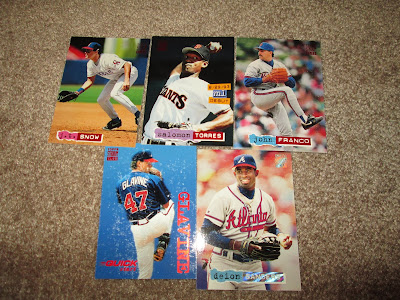 Five cards that were a big deal in 1994. The Salomon Torres card was the big rookie issue, even landing on the cover of the box. Man, the fact that I'd never heard of him before this sorta washes away the hype. Also, there's a John Franco card, and a shiny Deion Sanders. Also, a Tom Glavine Quick Start, but it's roughed up. 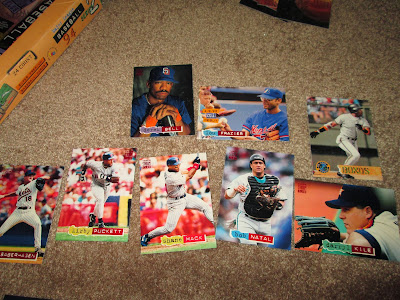 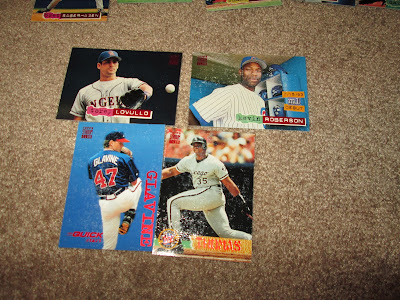 A couple of awesome sideways shots, especially the Kevin Roberson. Also, a Frank Thomas insert, and a better copy of the aforementioned Glavine. 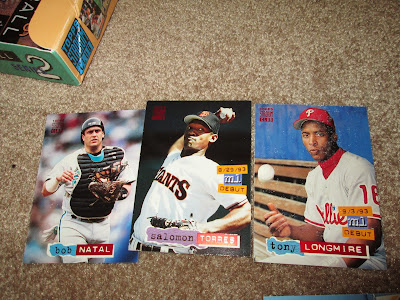 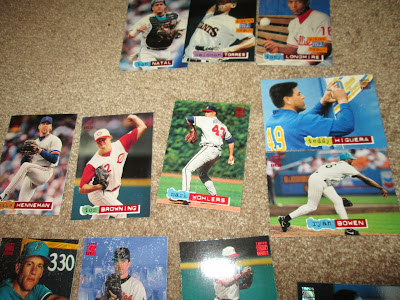 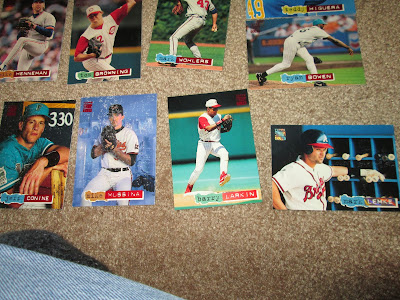 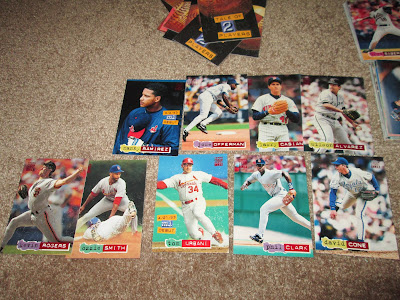 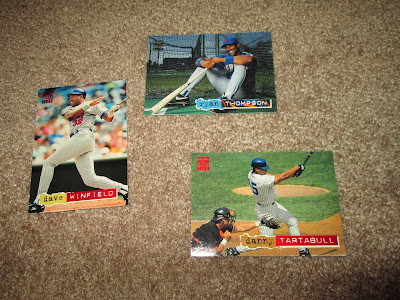 Sole survivors of the double epidemic. The Thompson shot is another really nice one. The Danny Tartabull card reminds me of how much of a disappointment he was as a Yankee. All he ever amounted to was a Seinfeld bit. "...and if Danny Tartabull were here right now, he'd say..." And also, I got a card of the guy Tartabull was trying to be, Dave Winfield, in a Twins uniform. Winfield would done only one more AL Central uniform before retiring, as an Indian. 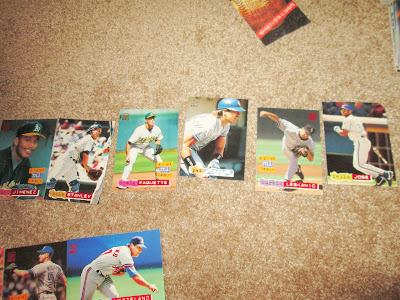 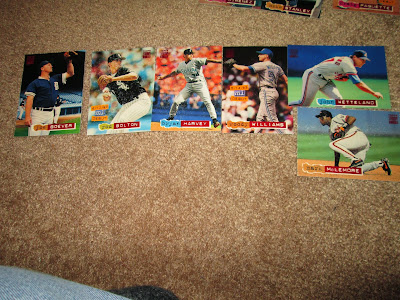 Not a lot of highlights here, although we do have a card of John Wetteland, before he was traded to the Yankees and became a World Series hero. 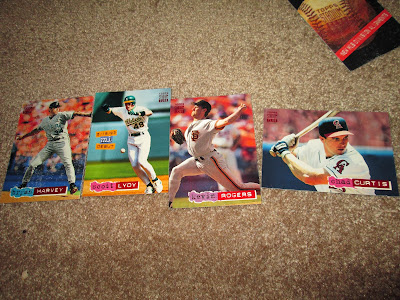 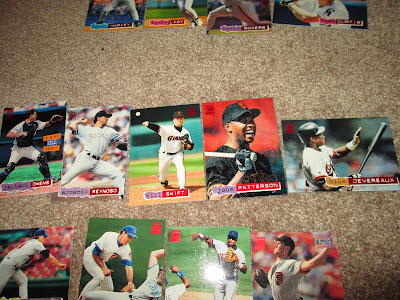 The Mike Deveraux card is a really nice one, as is the John Patterson. 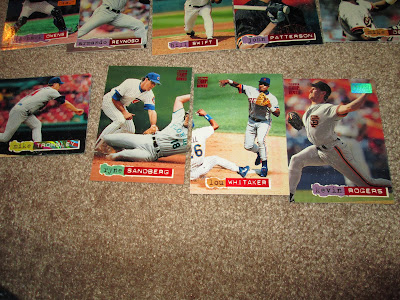 The highlights include a silver foil, a card of Lou Whitaker, a RYNE SANDBERG card, and the box's 2nd first day issue, of Kevin Rogers. However, the box's 2nd two-per-pack parallel trumps the first... 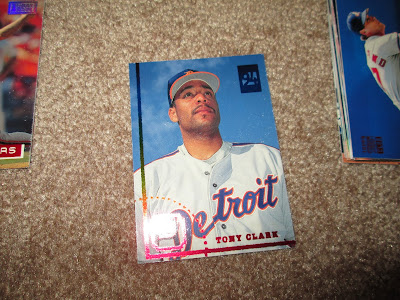 That is a Tony Clark '94 Bowman Preview, which is a little more colorful than the actual Bowman '94 design. But who cares. It's pretty sweet. 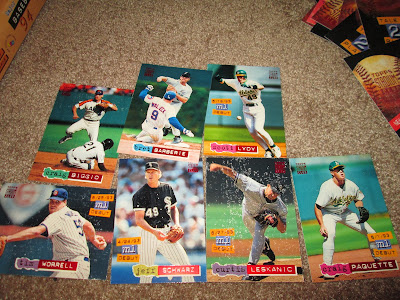 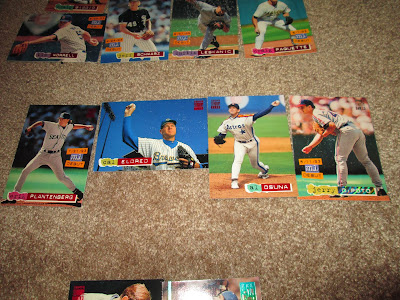 That Cal Eldred card is pretty nice. I keep forgetting how late the Astros wore their orange shoulder unis. 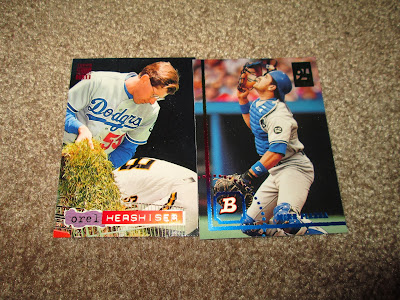 Two awesome Dodgers. One, an Orel Hershiser, featuring Grass fillings and a shopping card that makes more sense if I look at it closely. Who cares what he's doing, it's Orel. This reminds me, I have to do an Orel Hershiser post one of these days, as he has a tie to me and my hometown. And also, the box's 2nd '94 Bowman preview, a much nicer one, it's Mike Piazza. He should be a Hall of Famer, because I doubt he took steroids. 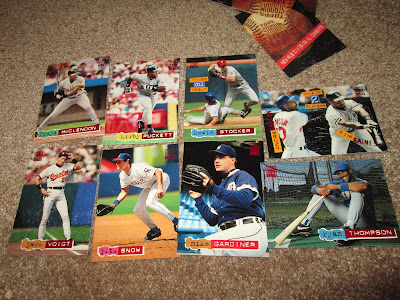 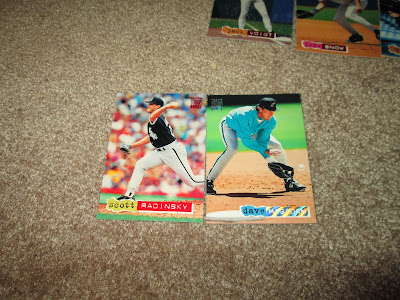 The lone 'okay' cards, including a cool Dave Magadan. 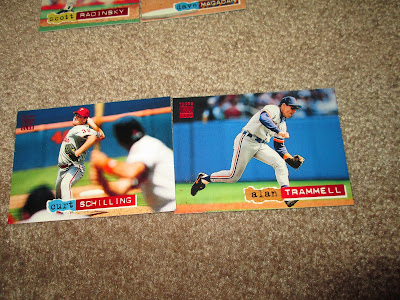 Two people who will likely be unfairly passed over for Coopestown induction this January round out the pack. Schilling is eventually going to get in, I imagine. Trammell has no shot. I don't think he deserves it, really. But either way, they're both great to pull.

Well, that was 1994 Stadium Club. What else is there to say? I love it. I had a great time ripping it. Anything anybody saw in these packs that looks awesome, shoot me a trade request.

Also, I took a risk, and I might have ordered, from Amazon, another box. And it may have been a box of Stadium Club again. And it might have been from 1995. So be on the lookout for that.
Posted by Jordan at 4:46 PM