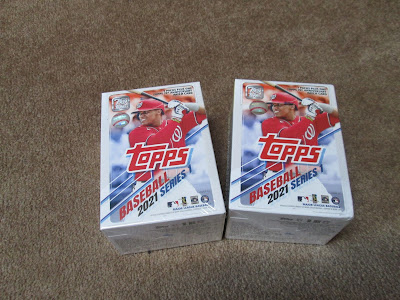 It shouldn't take a month for me to get Topps flagship.
It shouldn't take weeks of going to Target and finding nothing, and then wandering in one day and seeing a line of people queuing up for the possibility of getting on a list to potentially find a rack-pack of flagship, then saying it's not worth it and just getting two overpriced blasters on Dave and Adam's.
The hobby shouldn't be this unobtainable for casuals. If I were to start collecting now, I'd quit in frustration. And apparently when you say that online, it means that you're not a serious enough collector anyway.
We really need to be careful of how we're facilitating the hobby. It's supposed to be for everyone, and the stockpiling and price-busting that mega collectors have been doing is making things more and more elite. Sometimes, people want to break a box of cards just to pull cards of players they like. How about that? I don't know if I'm ever gonna sell anything I pull, though trades aren't out of the question [I really, really need to get better at trades]. I collect cards because it makes me happy. And the mega-mojo people who are driving up the price and creating scarcity are saying that's not enough now. That is bullshit.
I don't have to worry about a lot of that from the blogs. Y'all get it. The elitism and snobbery sort of disintegrated around like 2012. All the people who still blog have the right idea. So I'm not subtweeting you guys. But there's a lot of people on twitter who are just pissing me off lately. Who are you to judge people for collecting differently than you do when you're the reason Topps has to print even more cards and create a second junk wax era?
Alright. I do have cards here. So I might as well get to them.
Blasters of Topps, over the past few years, have become 7 packs, 14 cards per pack. In retail, that amounts to a 20 dollar purchase, I paid more than that for each these. Remember back in 2007 when 20 packs in a blaster cost 20 bucks? Remember how simple it was then?
Less cynicism, I know. Here's the first of two blasters of a product most of you have already got your fill of. 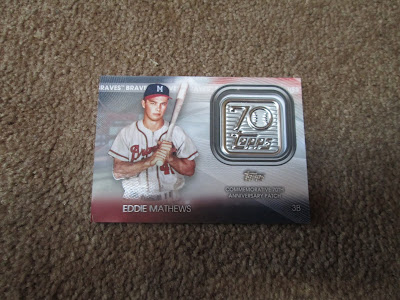 Manupatches still exist, they're these metal stamp things. Great checklist though. This one's Eddie Matthews. Nothing in this manupatch is specific to Mathews, but...Topps has been doing it this way since 2010, so why stop them? 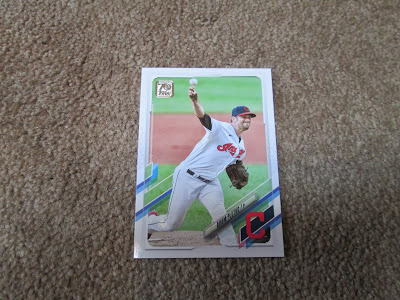 Pack 1- Here is the first card I pulled of 2021 Topps, of Adam Plutko of the Indians. I had to commit that to memory rather than read it from the insanely small name print. 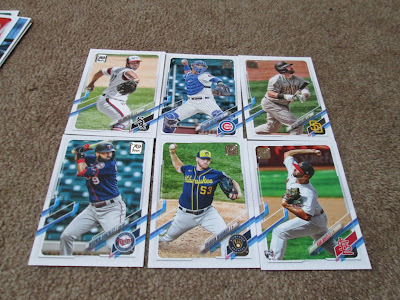 Some base stuff. I agree with most sentiments about this design, that it's too busy, too homogenized, how it's nearly custom-proof. I do like the return of white borders, the minimal foil, the pattern continuing through cards similar to 1991 Donruss. It's just not quite where I want it to be as a striking design. 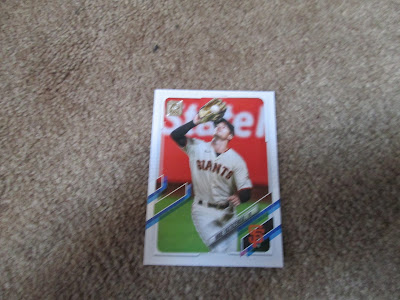 The occasional photo or star card works, like here with Yaz 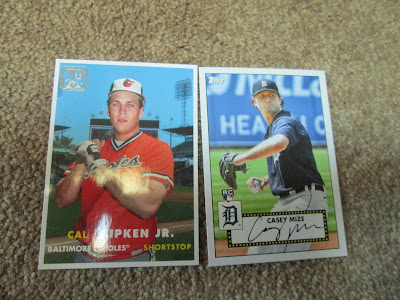 Inserts have been limited two-per-pack. Every pack gets a 52 reprint, these are cool and in the same vein as last year's Turkey Reds. Cal is a 70 Years insert, ripping off my 'newer stars in older designs' idea yet again. I do like the 70 Years ones as well, it gives some odd combinations and I like it a lot. I do think we've seen Cal in the 57 design before, though. 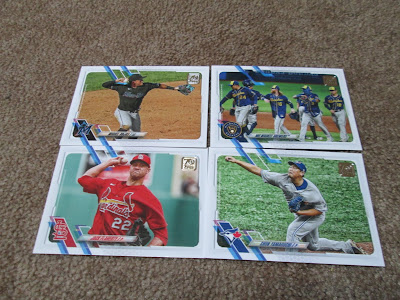 Some horizontals to finish us off. Bold move to make the Flaherty a horizontal. Bolder if he finally has an ace-quality season aside from his 2019. 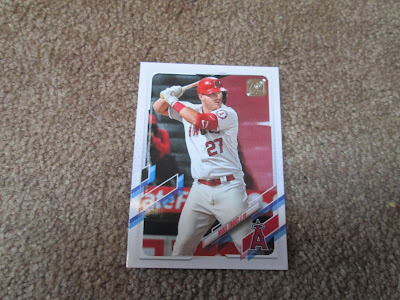 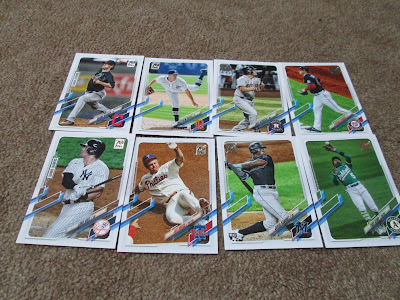 Mess o'base. Some cards have boring photos for players who aren't- that Patrick Corbin could have been better. Good news is we have Yanks/Phils content with Luke and Sliding Jay 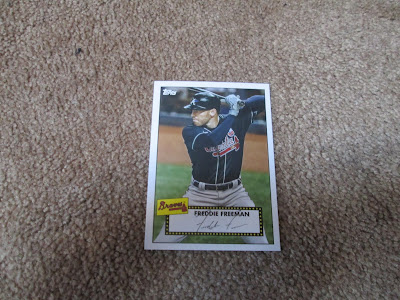 Sometimes, packs only give you one insert without a reason. Not complaining. Freddie is a solid 52 choice. 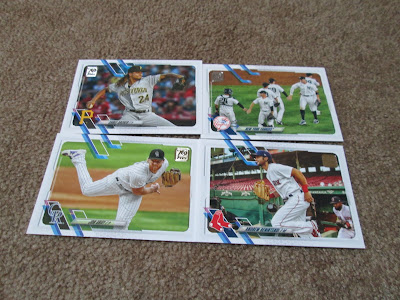 More horizontals. Benny and Archer are proof that Topps should just leave any free agents or potentially-traded players for the Series 2 checklist. Make Update easier on you. 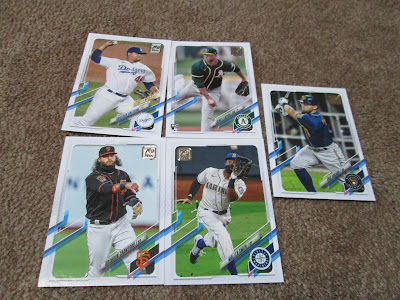 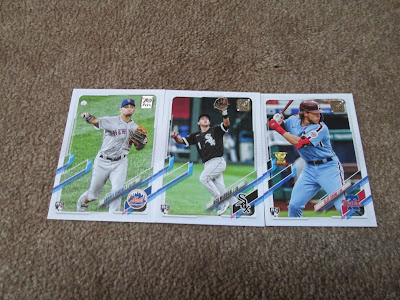 There are a mess of rookies in this set, and these are three of the cooler ones. Bohm was one of the ones I was excited to pull, too. 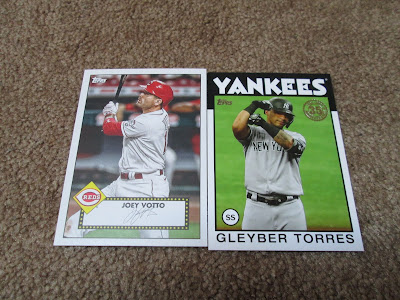 Can't really complain about either of these- Votto is a superb player that I'm cool with pulling cards of, and Gleyber is Gleyber. 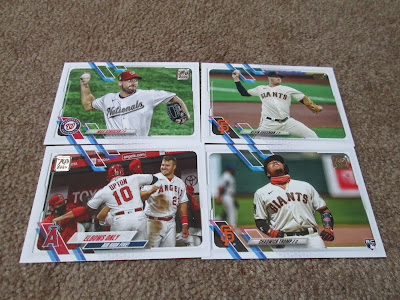 Horizontals. Scherz's ferocity comes through these, as does Tromp's disappointment. 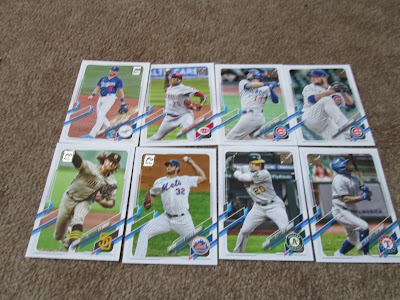 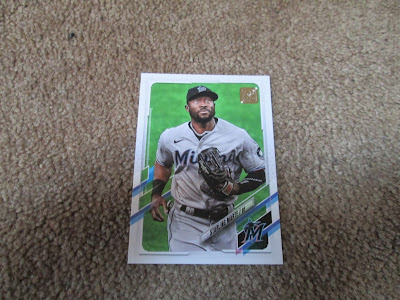 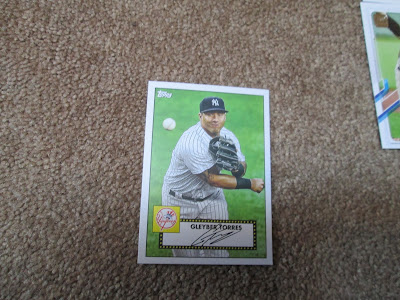 Only one insert once again, and the Gleyber love keeps coming. 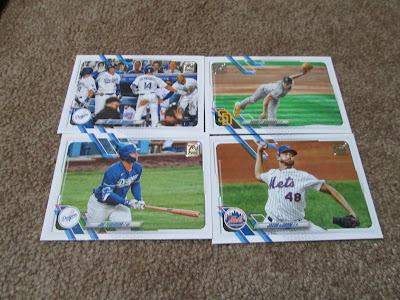 DeGoat and 3 other NL West ones. The Richards is cool because of the wideness, and the glove making them go wider. 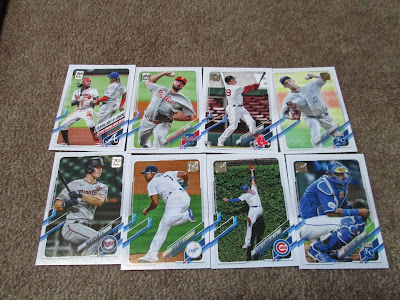 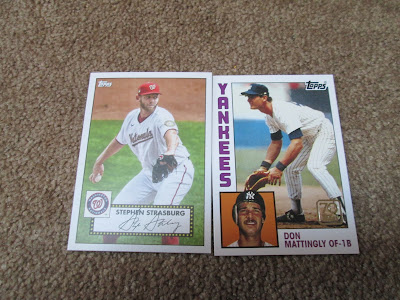 Inserts. Stras is always cool to pull. That Mattingly is a Through the Years time thing, where the front is his iconic 1984 rookie... 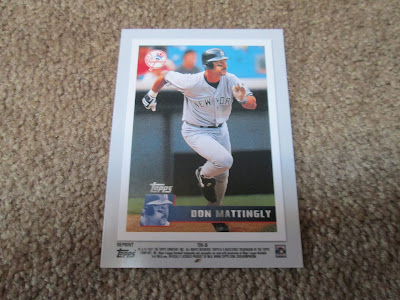 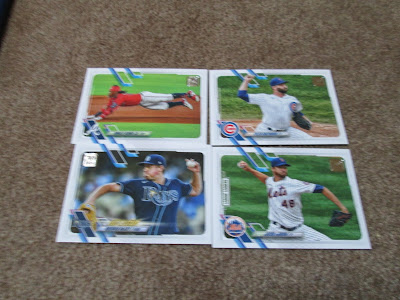 I LOVE that Acuna card. The other 3 are pretty basic. 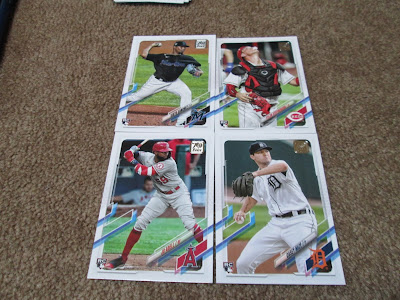 Pack 6- Four of the biggest rookie cards in the set in one pack. Sixto, Adell and Mize will be worth a lot if they pan out. Stephenson's is gonna grow as he gets more playing time. 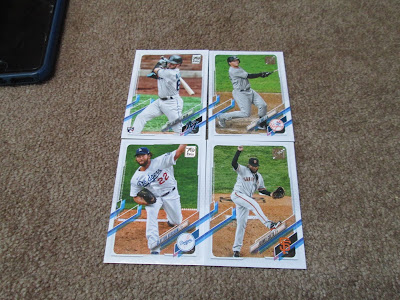 Non-rookies from the first half, including another Voit and a Kersh. 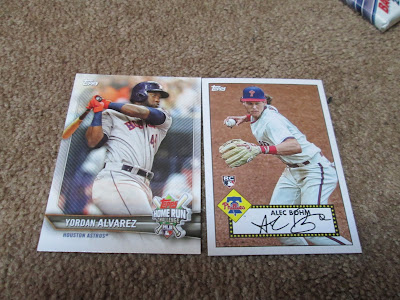 My relatively rare Home Run Challenge is the hopefully healthy Yordan Alvarez, and the 52 is, of course, Philly rookie star Alec Bohm. 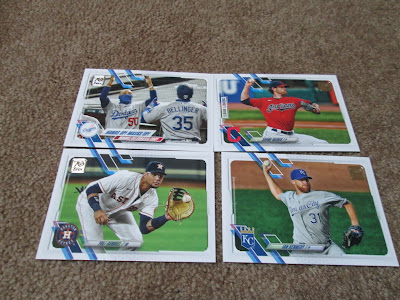 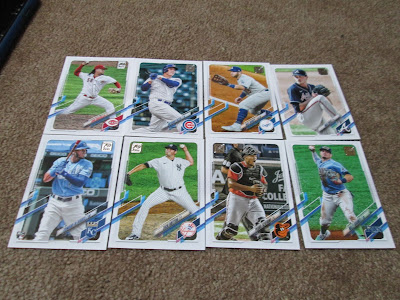 Pack 7- Base stuff. Lots of star cards here, between Adames, Castillo, Rizzo and Muncy. Britton is the Yankee highlight for me. 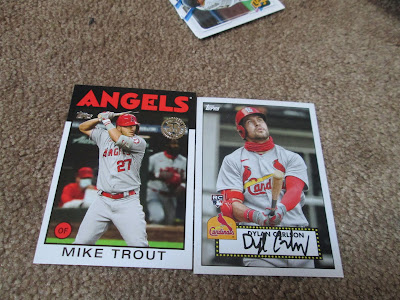 My 86T is the moneymaker, Mike Trout, and my 52 is a Cardinals rookie that I don't know a ton about. Good for him. 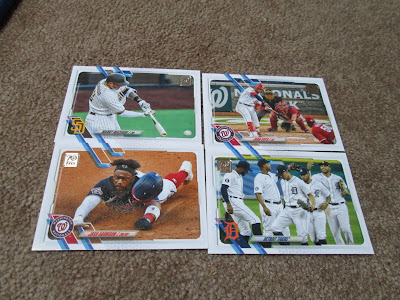 We end the box with Machado, Soto, and a great Harrison slide.
Solid stuff, and a lot of base stuff I was looking for. Second box tomorrow.
Posted by Jordan at 8:17 PM