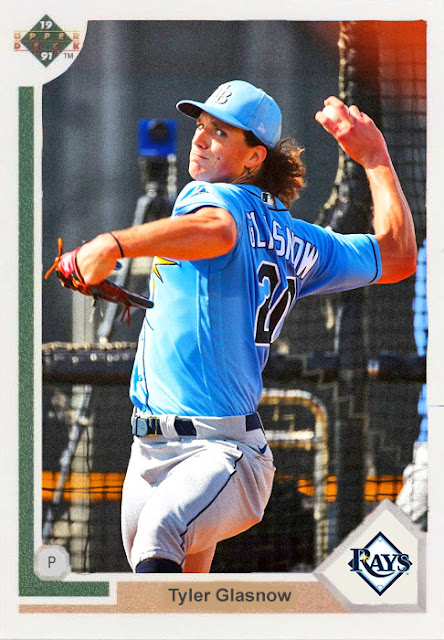 The Tampa Bay Rays in 2021, immediately post-WS...but sans Morton, Snell and Renfroe. Are the sportswriters correct in assuming that the blade is duller this year?
Like, let's examine this. Technically, their staff ace is Tyler Glasnow, who's a veteran of 3 seasons with Tampa, and has flirted with greatness on several occasions. Glasnow had a 1.78 ERA in 12 starts in 2019, but his output was halted due to an awfully-timed injury. Last year he was healthy for the entire season, but had a 4.08 ERA during regulation and had a 2-3 record in the postseason with 20 earned runs. Is the team ready to rest the laurels of this rotation on Glasnow's inconsistent shoulders?
They seem to be, because the rest of the rotation spots could go to either young innings eaters like Ryan Yarbrough and Pete Fairbanks [Yonny Chirinos is probably still out for the bulk of this year], or veteran pickups like Rich Hill, Michael Wacha and former staff ace Chris Archer. Archer could be expected to fall back into his top-of-the-rotation role from the middle part of the decade, but I think his skills and mechanics have lessened since 2017.
The lineup I'm not worried about, though. Kiermaier, Lowe, Adames, Brosseau and Arozarena will probably still be in peak condition. The bullpen is still in pretty good shape, but slowly some of the bigger names, like Jose Alvarado and John Curtiss, are beginning to be siphoned out of it. There's still some big names, like Diego Castillo, Nick Anderson and Chaz Roe, but the fact that they're utilizing more free agents than call-ups is a sign that the tide is beginning to turn on this once youthful and strong bullpen.
It's the kind of thing where...the perfect storm that was this 2020 Rays team may be impeded upon trying to have a season as completely productive as the previous one. It could happen, but considering how competitive both the Yankees and Blue Jays are trying to be, I'm not certain. But...the Rays are still gonna be interesting to watch, that's for certain.
Coming Tomorrow- The Phillies needed bullpen help after 2020, so they enlisted some very big guns.
Posted by Jordan at 3:19 PM