Night of the Living Phillies Bullpen 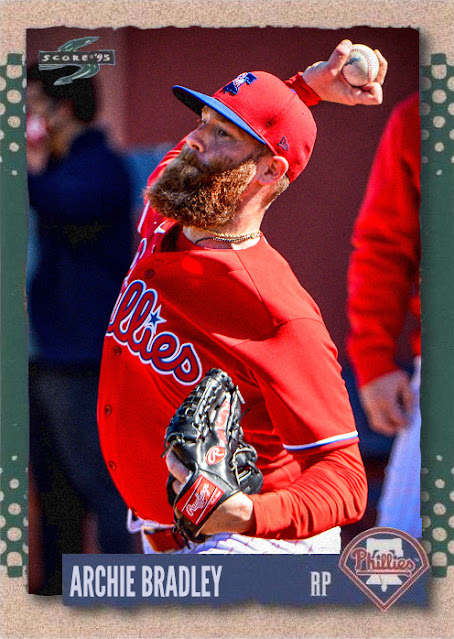 I feel like one of the things you have to contend with when you're a Phillies fan is that every now and then, your team will just...have a really crappy bullpen. And then maybe the next year it'll get marginally better, but unless actual effort is put in, it's gonna suck again eventually.

So, after a truly terrible season where Philadelphia had the fourth-worst bullpen in baseball...and singlehandedly tanked the statistically second-ranked rotation in baseball, Dombrowski and company needed to step into overtime and build back the Phillies bullpen.

First of all, they kept a few members of the previous bullpen configuration. Hector Neris is sticking around, because even if his closing can be scary at times, he does have strong moments as a bullpen piece. JoJo Romero, Ranger Suarez and Connor Brogdon are also carry-overs, and they should be alright.

The biggest bullpen acquisition was Archie Bradley, because...i mean, how do you top that? Archie Bradley was stellar in Arizona, never especially wanting to step into a closing role but doing so with gusto, and accomplishing a great deal in middle-relief in Cincinnati last season. He's a league-caliber arm, a formidable, bearded relief asset, and someone who an entire bullpen can be built around. Bradley looks to be landing the closing gig, which is a good thing.

David Hale is also a good pickup, because the former Yankee reliever seems to be in good form already this spring, and has worked with Joe Girardi before. A lot of the successes of these early Phillies incarnations under Girardi have been old Yankee people coming in and reconnecting with the former Bronx skipper. How else do you explain Didi Gregorious' wild start in 2020?

Also, Jose Alvarado has been picking up some serious velocity in camp, meaning the Rays giving him up due to not being as consistent as Diego Castillo is looking like a very misguided move. Alvarado could be our eighth inning king this year, and I am absolutely fine with that.

Also, Sam Coonrod might make the team, but...I really don't want him to. I really don't want to continue to have to type the name 'Coonrod' on this blog. I don't care if you come from a long line of raccoon hunters or whatever the hell. It's still a very unsettling name.

The part that most publications are overlooking is the fact that the Phillies also have a lot of impressive non-roster invitees that could break onto the bullpen. Imagine if Brandon Kintlzer or Tony Watson make the team? Kintzler had a comeback year in Miami last year, he's got a decent chance if he displays any of that success in camp. Watson is a longer shot, but he could still have some nice stuff left. Hector Rondon is also in camp, and I think he's the longest shot of these three, but you never know.

The bottom line is that I feel better about this Phils bullpen than I have in a long time. There's a lot of fun setup options, a great closing choice, and a lot of depth that could aid us for a bit. Hopefully none of these guys make us look silly. I'm still reeling from David Robertson. But I feel really good about this bunch, especially Bradley.

Coming Tonight (?)- Yeah, might start doing the two-posts-in-one thing early, cause I have a lot of these made. Time for one of the most surprising trades of the offseason, and how he's aiding a low-key AL Central market.