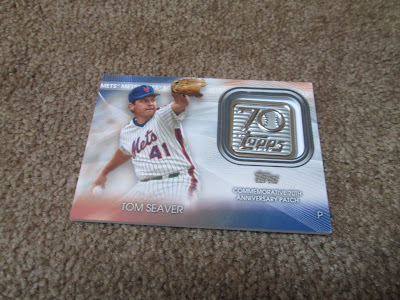 Yesterday I showed off the first of two blasters of 2021 Topps Series 1 that finally arrived for me. Today, we're tackling the second.

I don't like manupatches, at all, but getting a Seaver this year is pretty special. So that's something. 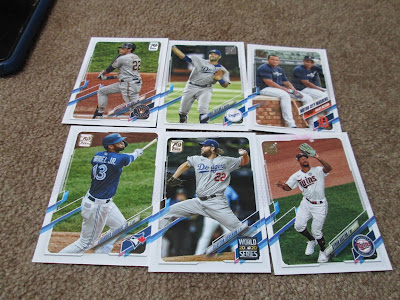 Pack 1- Pretty cool base stuff here, what with Yelich and Kersh. I also like the Buxton photo. 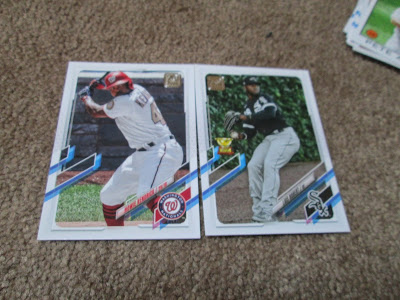 A final tribute for the great Howie Kendrick, and a second-year card for Luis Robert. Not bad at all. 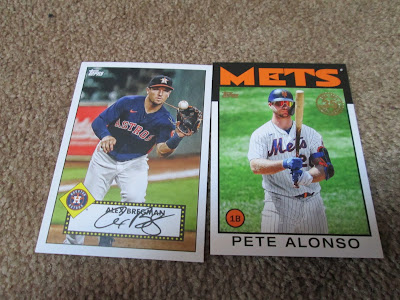 My inserts- My 52 is Alex Bregman, who I'm still not a big fan of. And my 86 is Pete Alonso, who I hope rebounds this year. 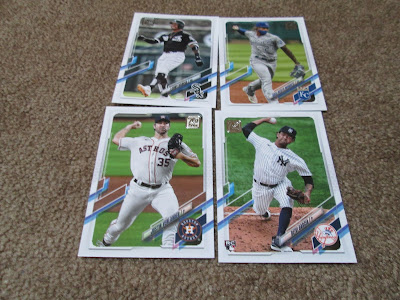 We finish off tiwh some AL Central infielders, Verlander, and that sweet, sweet Deivi Garcia rookie. 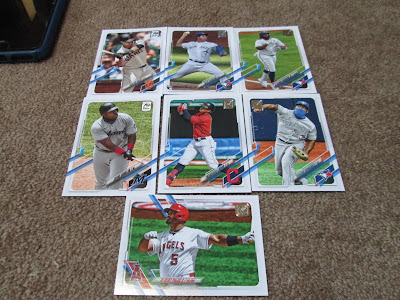 Pack 2- More standard base, though star power in the form of Posey, Vlad Jr., Lindor and Pujols. 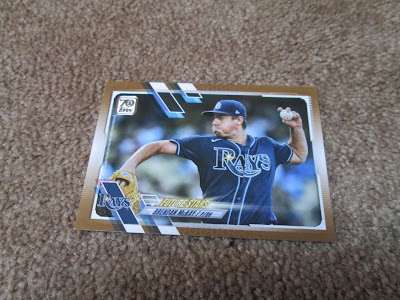 Got a pretty well marked gold card, but it's of Brendan McKay, a two-way player who the Rays aren't sure what to do with. 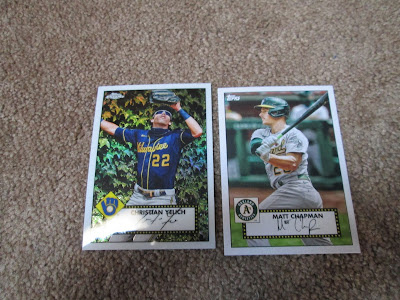 Double 52 goodness- Yelich is a chrome parallel, Chapman's is a regular. Very cool. 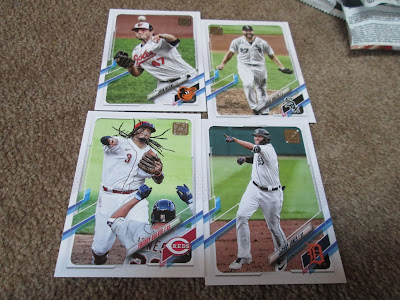 Remainder of base stuff. Galvis and Means are now on the same team. 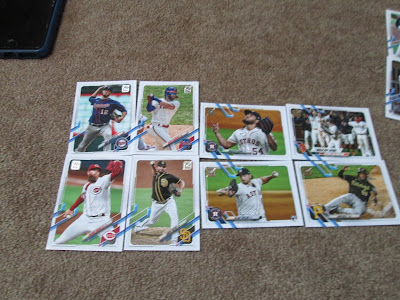 Pack 3- It became clear here that this blaster was organized differently than the previous one. Here, the horizontals went before the inserts, not after. Strange. Still, happy to pull Bryce and pre-Phils Bradley. 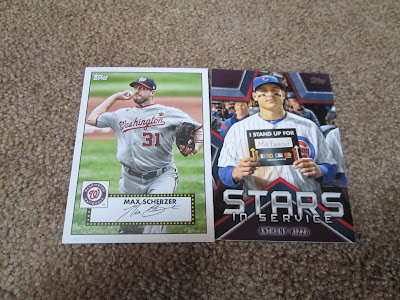 That 52 Scherz ain't bad. Stars in Service is a very boring insert set. 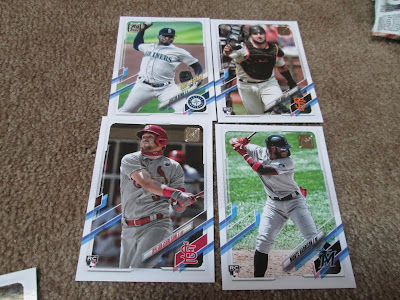 And we finish up with 3 rookies and Justin Dunn. Bart is a nice one, though. 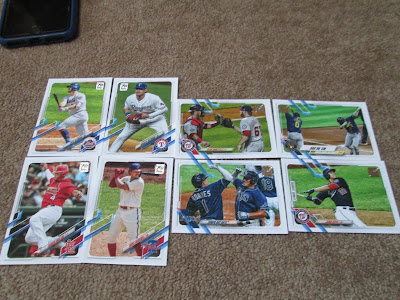 Pack 4- Hoskins was my highlight, but Doolittle has a great photo, and that Arcia dab card is kinda charming. 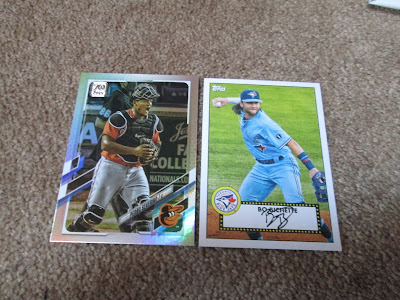 Severino is an unnumbered foil shiny card, which...fine. And that Bo 52 is a nice one. 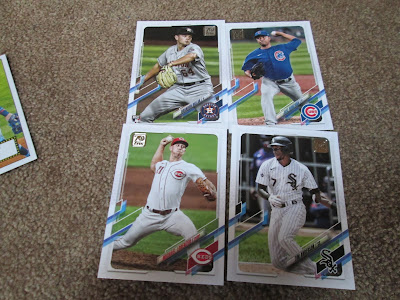 Some standard base stuff. Tim Anderson is looking at another nice year, I hope. 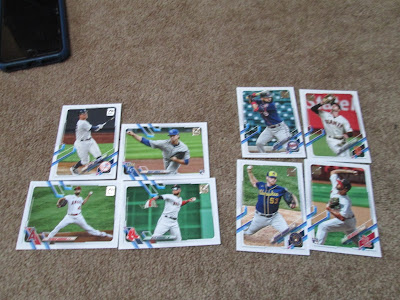 Pack 5- Here the dupes from box 1 began to trickle in, all those on the right. So it took away from needs like Judge and that sweet Verdugo shot. 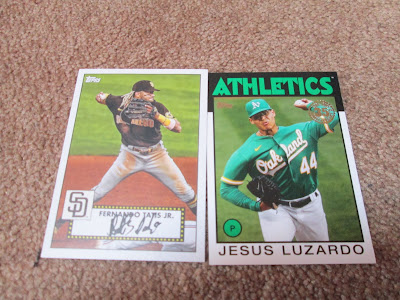 These weren't dupes though- Tatis looks great on this design, and I like the weekend kelly green A's unis matching up with the 86 design. 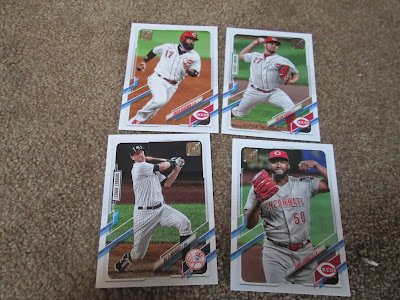 DJ and some Reds, though only AG is still with the team. Also, that AG shot is awesome. 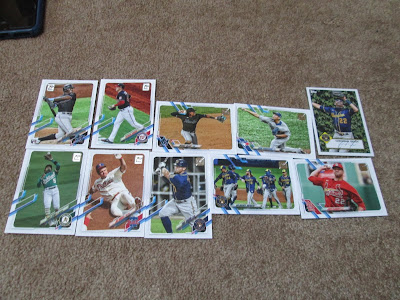 Pack 6- All of these are dupes from Box 1. Including the Yelich 52, the pack's only insert. 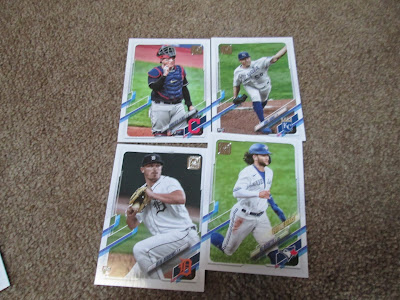 These 4 were new, though. Skubal is a decent KC pitching prospect, and Bo is Bo. 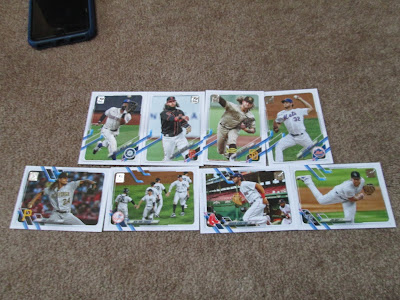 Pack 7- more dupes. Topps' collation can't even wait one single purchase in order to disappoint me. 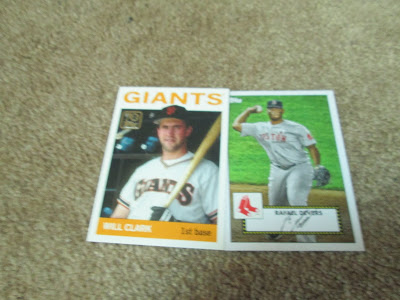 My 70 Years of Topps was one I don't have a ton of use for, since I don't collect Will Clark. Looks moderately cool here, like a 90s Topps Magazine punch-out
Devers looks cool in 52, though. 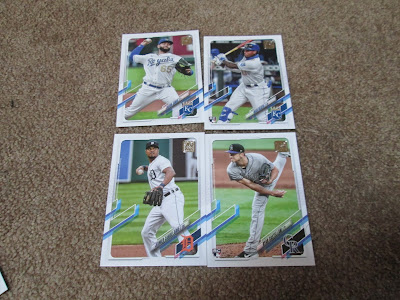 And we end on some AL east players and a Rockie.
So yeah, that's 2021 Topps. It's fine. Perfectly functional. It'd be held in better regard if the real collectors could find any of it in the wild, but even then I don't see a lot of us buying more than a few packs. I'll be hunting for amusing singles and inserts from this, but if getting blasters is that much of a hassle, I don't know if I'll be able to snag more anywhere.