Spring Training games have begun. Normally by the time that happens during a normal season, I'd have already opened packs of cards. Not the case in 2021. I had to get a couple blasters online, overpriced, just so I wouldn't have to have retail shops keep letting me down.

So, all the more incentive to keep cranking out these 2020 Final Edition cards. So here's the next binder page of the set. 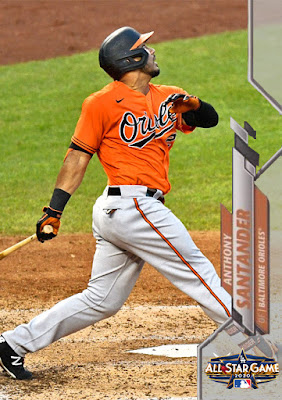 Card #037- Anthony Santander ASG, Baltimore Orioles
The way these supposed 2020 rosters would have worked, Anthony Santander would have been the sole Oriole on the AL team. Not a huge shock, as they didn't have a pitching standout or league talent in 2020 other than the hard-hitting Santander. But you also have to consider that A.) the team hero, Trey Mancini, is already out for the season, and B.) Santander gets injured with a good month or so left to go in the season. Either it's an indicator of a long career or a reward for a peak season. The ASG gods know not. 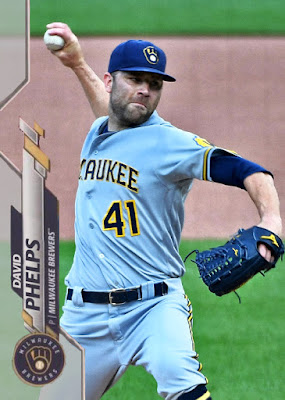 Card #038- David Phelps, Milwaukee Brewers
Topps did David Phelps so dirty in 2020 that he has two base cards in this set, both with different teams. Phelps was coming off a season split between Toronto and Chicago, and signed with Milwaukee for a lower key market year. This move made Phelps into an early season threat in relief for the Brewers, with a 2.77 ERA in 12 games. In a season of disappointment, Phelps was one of the highlights. Which meant that Phelps was prime for a trade, and...we'll talk about his Philly woes in another post. 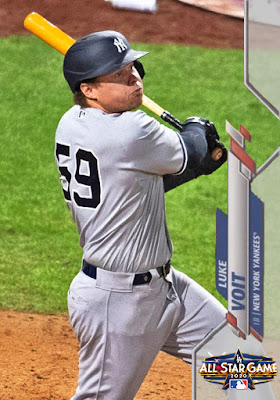 Card #039- Luke Voit ASG, New York Yankees
Luke Voit would be blocked at getting the starting 1B job for the AL ASG team by Jose Abreu, but a season like Voit's could not be ignored, and so he'd get a reserve nod. Seeing as Voit would finish the season with a league-high 22 home runs, I can see why. Voit is slowly turning into a great power hitter, and he has enough of a dimension to him that he's not at Schwarber or Pederson levels of one-dimensionality. 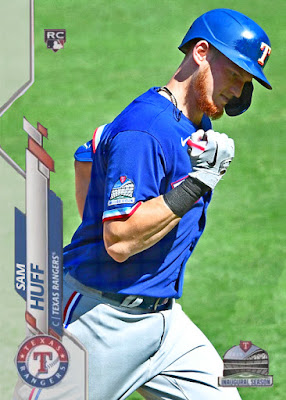 Card #040- Sam Huff, Texas Rangers
After several catching options for the Rangers got either injured, traded or were Jeff Mathis, the Rangers decided to bring up their top prospect at backstop, Sam Huff, for a 10 game run. Yes, the Rangers were out of the conversation and it wasn't long enough for anyone to really make an impact, especially considering that Jose Trevino would likely have the catching position in 2021, but Huff would still be able to make a statement. And that he did, hitting .355 with 4 RBIs including 3 homers, and a .5 WAR, in that ten game run. It's not certain whether or not this impressive audition means anything for the 2021 season, but it's clear how good Huff could be on a lengthened run. 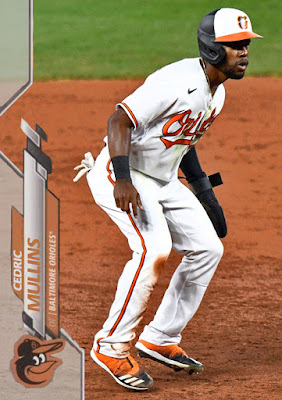 Card #041- Cedric Mullins, Baltimore Orioles
After Mullins debuted in 2018 and Topps missed the boat by cashing in on his rising star in 2019, as Mullins was hitting below .100, they decided to not make a card of him for 2020...of course, the one season where he actually gets stuff done at the MLB level. In a backup outfielder role, which became more frequent after Santander got hurt, Mullins hit .271 with 12 RBIs and 3 homers, certainly not a bad run of things. Thanks to the return of Santander and Trey Mancini, Mullins might be looking at another backup role in 2021, so hopefully he'll continue the strong numbers off the bench. 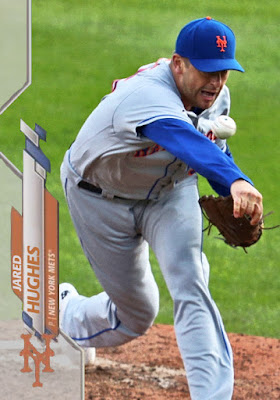 Card #042- Jared Hughes, New York Mets
Now that we know that Hughes has hung up his cleats after 2020, Topps' decision not to give Hughes a final release is a bit more of a betrayal. Hughes had spent the 2019 season split between the Reds and Phillies, and signed with the Mets during the offseason. In 18 games in Queens, Hughes had a 4.84 ERA, 21 Ks and a 1.6 WHIP. Not the greatest final career stats, but he had a storied career in relief, and was a standout for Pittsburgh and Cincinnati. 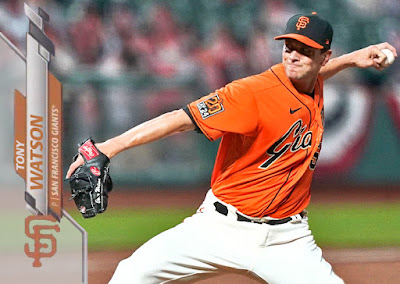 Card #043- Tony Watson, San Francisco Giants
Speaking of former Pittsburgh relievers, Tony Watson is still riding out his three-year deal in San Francisco in 2020, and Topps...seems to have forgotten about him, due to his less starry and more useful role in the Giants' bullpen. His 2020 was a step up from his 2019, as he finished the season with a 2.50 ERA in 18 innings, with 2 saves as well. The Phillies have banked on Watson for a minor league deal out of spring training, and hopefully he keeps up his 2020 momentum. 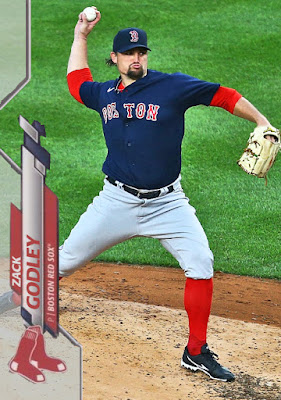 Card #044- Zack Godley, Boston Red Sox
A few years removed from his prime spot in the Diamondbacks rotations, Zack Godley has become just another okay starter just trying to get gigs where he can. In 2020, he was plugged into the leaky Red Sox rotation, and his efficiency was still not where it was in Phoenix. He started 7 games, lost 4, and left with a very dire 8.16 ERA, having his rotation spot handed to Tanner Houck. I'm not sure where he'll end up this year. 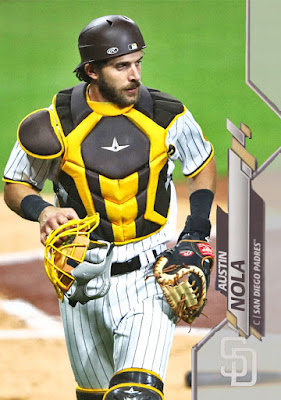 Card #045- Austin Nola, San Diego Padres
Austin Nola has become something of a feel-good MLB story. After years of toiling in the minors as a member of the Marlins organization, Nola signs with the Mariners and gets a starting gig well into his first season with the team. Then, after he becomes one of the standouts of the lineup in 2020, he's traded to a contender, San Diego, where he has a chance to be the starting catcher in 2021 for one of the most powerful teams in the league. Nola's appeal is in his offense, and despite his .222 Padres numbers, he still had 3 postseason RBIs this year.
Next one of these is on Friday. A few more utility guys, and another player who's already retired.
Posted by Jordan at 1:37 PM