Okay, this is the day that I still have engrained into me to do these posts. Fridays are gonna need a few more repetitions, but Monday is firmly in there. Here's the next 9 cards of the set. Some intriguing inclusions here. 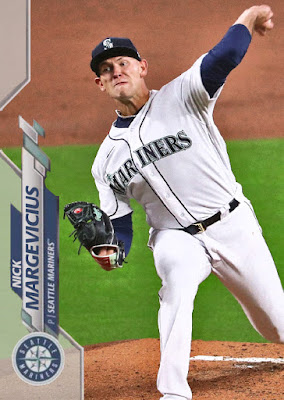 Nick Margevicius was one of the first players in the 2019 incarnation of the now-ironclad San Diego rotation. Margevicius was brought up with Chris Paddack and Pedro Avila as a way of sprucing up the rotation with youth. It didn't especially work, and Margevicius struggled after his first few starts. So the Padres waived him, and Seattle bit. Due to the overwhelming lack of rotation options, Margevicius started 7 games, ended the year with a 4.57 ERA and was a decent lower-rotation pick after Gonzales, Sheffield and Dunn. Not sure if there'll be room for him in the rotation in 2021. 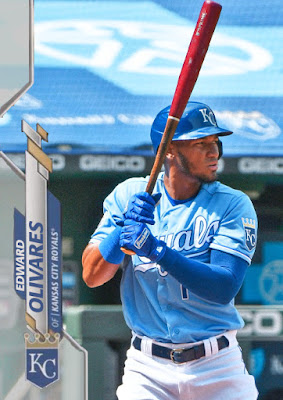 Card #056- Edward Olivares, Kansas City Royals
Edward Olivares was fulfilling the Franchy Cordero 'extra outfielder' role in San Diego before going the way of Cordero himself and being traded to Kansas City for a reliever. Olivares, though, got to some contact hitting in 18 games in KC, hitting .274 with 17 hits and 7 RBIs, and factors into the starting outfield conversation for 2021. Not bad for one of many Padres outfield prospects to be splayed across the AL. 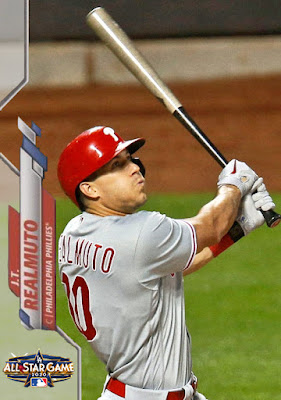 Card #057- J.T. Realmuto ASG, Philadelphia Phillies
Realmuto, the catching giant of Philly, would have actually missed the NL starting gig for the ASG voting by a few meters, thanks to some voting from the LA general area. But he'd still make the team as a reserve, because he's one of the best catchers in the game, is one of the best elements of a still-meh Phillies lineup, and, if 2020 had been normal, could have been in his last season in Philly, so to get an ASG nod in both Philly seasons would have been pretty cool. 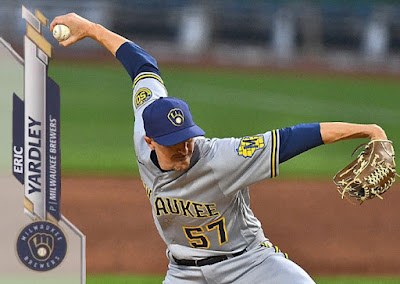 Card #058- Eric Yardley, Milwaukee Brewers
Another member of the sprawling but mostly anonymous Milwaukee bullpen, Eric Yardley is, heh, YET ANOTHER FORMER PADRES FARMHAND who was waived by San Diego during the 2019 offseason. The Brewers picked him up, and Yardley responded with a 1.54 ERA and 19 Ks in 24 appearances, along with 2 postseason strikeouts against the future World Champions. Yardley is 30, but will still be a crucial piece of the 2021 Brewers bullpen, especially with Devin Williams and Josh Hader looking to be healthy. 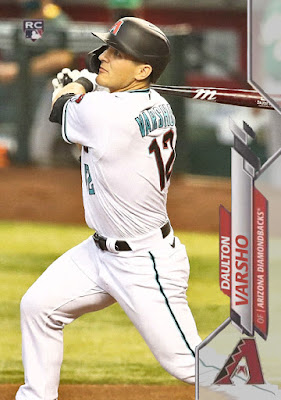 Card #059- Daulton Varsho, Arizona Diamondbacks
The high-ranking Arizona prospect finally made it to the bigs in 2020, but the output may not have been what the fans were hoping for. In 37 games, Daulton Varsho only bat .188 with more strikeouts than hits. He was still an impressive defender and roster piece, but by the end of the season the D-Backs were bringing up Pavin Smith as an alternative. Interesting to see where he spends the majority of the 2021 season. 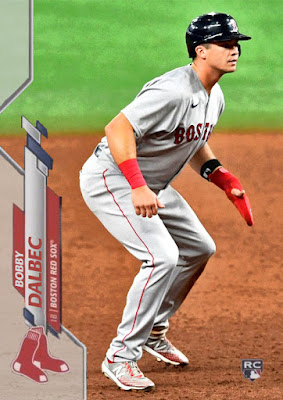 Card #060- Bobby Dalbec, Boston Red Sox
He appeared on the scene like a freight train. A longtime Salem & Portland slugger, Bobby Dalbec finally made it to the majors in 2020, and made a name for himself quickly, hitting 8 homers in 23 games, his first few all in consecutive games. Dalbec is looking at a starting role with the Sox, and a new young power hitter is exactly what the Sox need right now. 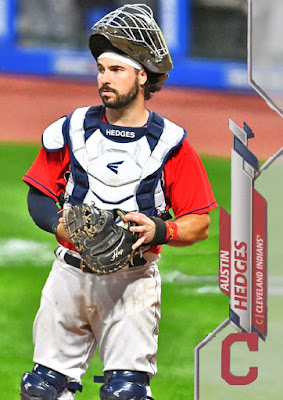 Card #061- Austin Hedges, Cleveland Indians
After five seasons of low-average, decent-defense work as the catcher in San Diego, Austin Hedges was finally moved out of a starting role thanks to Francisco Mejia and, eventually Austin Nola. Hedgey, along with Josh Naylor, would be traded to the Indians for Mike Clevinger, and Hedgey sort of limped along for 6 games, hitting .083 with only one hit. He'll likely be backing up Roberto Perez this year in Cleveland. 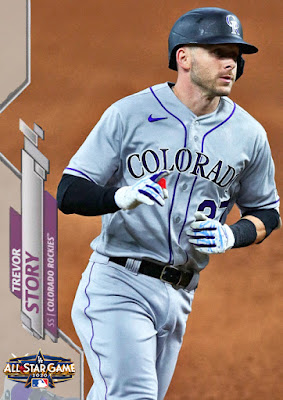 Card #062- Trevor Story ASG, Colorado Rockies
Story would have been the third of three NL shortstops on the proposed 2020 ASG team, and would have been a reserve member. But it would have been his third straight ASG nod, and a foreshadow of his status in 2021 as one of the few marquee Rockies left on the team after Arenado's departure. Story is a fantastic player, and has improved so much since his rookie year, but I worry that his time in Denver is coming to a close. 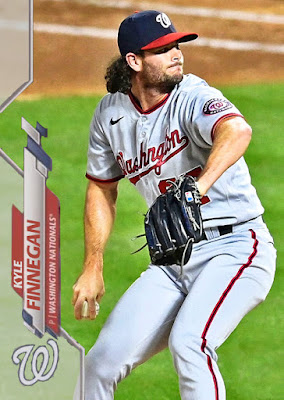 Card #063- Kyle Finnegan, Washington Nationals
Brought up in the wake of the Nationals' WS win, Kyle Finnegan was one of the many young, unestablished bullpen tools brought in to keep the team strong despite the lack of most of its 2019 core. Finnegan was one of the better relievers on the team in 2020, with a 2.92 ERA in 25 games, with 27 Ks. Will definitely be of use in a stronger, rebound year for the Nats.

The next 9 of these will come on Friday. Some of the most intriguing uniform changes are in this one.