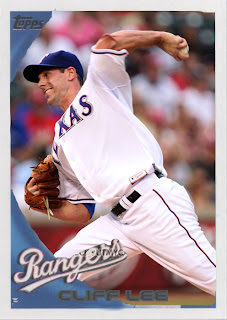 You can believe your eyes. It's a 2010 Topps card of a recently traded phenom who used to play for the Phillies. This is an actual photo that will be used in the Update set.
Okay, I'm screwing with you.
I made it the night before I flew out to SF. And now I'm back, and this guy's pitching beatutifully against Jered Weaver, who will have a custom up tomorrow.
But back to me. I just got home from San Diego. I could be mistaken, but if I know former Yankees as well as I do, David "Boomer" Wells was on my flight. No I didn't get an autograph, because from what I've heard, he isn't the nicest guy when it comes to fans.
I'm anxiously awaiting A-Rod's 600th home run. At this point, I've forgiven him. No longer is he A rod, the once hyped phenom who wasted his career by needling up the wazoo, he is A-Rod, the Yankees Third Basemen who for a time was my favorite player, and still might be.
And if he hits 600, I'll be wearing my Yankee Jersey and clapping
(Just don't tell him it's a Jeter jersey)
Posted by Jordan at 9:50 PM
Labels: 2010, 600, Alex Rodriguez, Cliff Lee, David Wells, Rangers