Custom Card of the Day: Because he deserves it 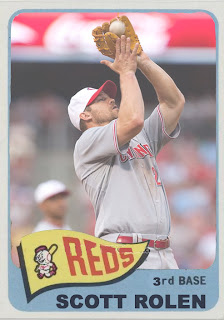 When he was on the Phillies, I loved Scott Rolen. When he moved to St. Louis, I liked him. When he was in Toronto, I despised him(Or at least his team). But now that he's having a tremendous season for the Reds, the love's coming back to this Philly Phan. And he's an All Star, which he deserves.
Now to something you might care about.
On Thursday morning at 10:00 I'll be on a plane to San Fransisco, and for the week I'll be all over the great state of California (Mainly because of the Comic Con tickets, but you people don't care about that). I'll be going to a Giants game, and I'll be going to a Dodgers game at their respective stadiums. And I'll be keeping a laptop handy, so you'll be up to date on my games, and some card finds (And I know for a fact there will be some).
Posted by Jordan at 10:58 AM