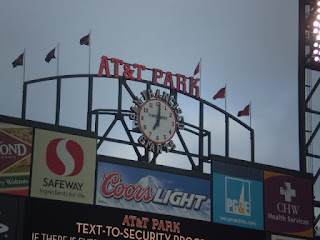 I'm the kind of guy who will travel the country, go through plane rides, car rides, train rides, any transportation, any weather, any time...just for a good baseball game. So my family hopped on a plane to Frisco on vacation to California, and we picked 2 games- a Giants game and a Dodgers game. This post will document my Friday night Giants game. 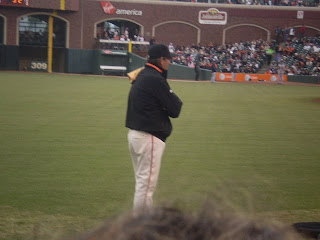 Dave Righetti, former Yankee and Giant, is the pitching coach. Rags is a bit of a legend down in the Bronx, so I had to snap a shot of him talking to tonight's starting pitcher. 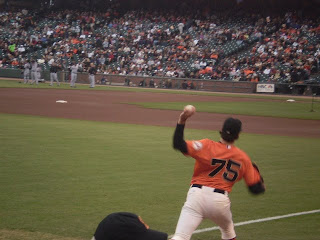 Speaking of starting pitcher, there he is. Former Oakland Prospect Barry Zito started on the mound that night against the New York Mets. 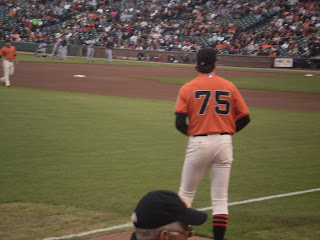 Our seats were very close to the Giants bullpen, so whenever a Giants pitcher warmed up, we'd be the first to know. 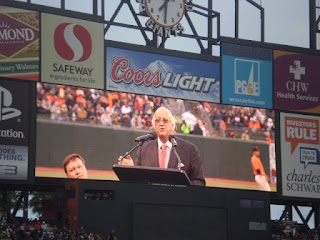 That night was very special for Giants fans. Legendary broadcaster Jonny Miller will be inducted into the Baseball Hallof Fame soon, so the Giants gave a ceremony on his behalf. This included... 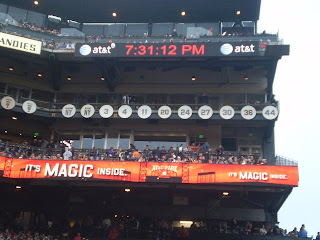 Miller's emblem and name being retired by the Giants association, and... 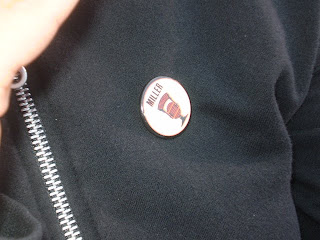 Everyone being given a free Miller pin. 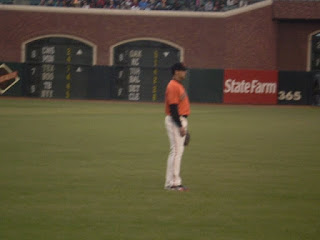 Standing in Left Field was a Philadelphia favorite, Pat The Bat Burrell. We attempted, on many occasions, trying to get him to throw us a practice ball, by yelling "HEY PAT! WE'RE FROM PHILLY!" I don't think the other Philly fans have liked it when Burrell comes to visit. Thome...they scream and cheer and clap. But a Philly legend like Pat? BOOOOOO! 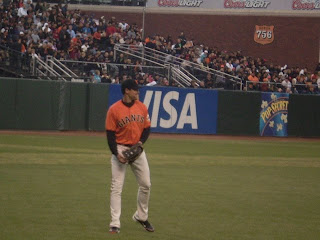 Another shot of Pat the Bat, 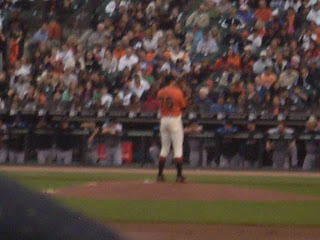 Barry Zito in action. That night, he pitched a two hitter, slowing down the Mets' offense and letting not much go by. 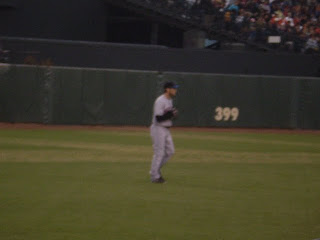 The Mets' left fielder, former Boston Red Sock Jason Bay, would've been better if he were wearing a Yankee uniform like we planned it, Cashman! 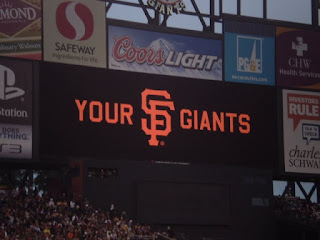 Just a Friendly reminde of who was playing. 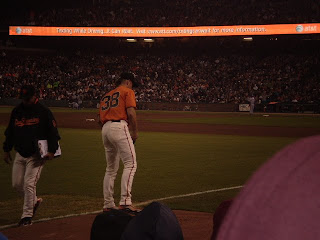 Of course, after Zito got the batters slowed down toward the 8th inning, there was only one man to turn to... 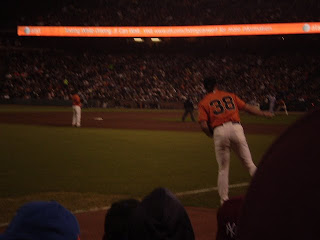 WIIILLLLLLSSOOOOOOONNNNN!!!! Seriously, that's what the Giants fans yelled. I'll have you know that I ate at a Bubba Gump earlie that day, and to go from "Run Forrest Run" to "WILLLLLSSOOOON!" is quite a change. But man, Wilson is something. He gave up a hit, but he still fanned down three New York batters.

Overall, it was a nice game. Of course, last night was the Dodgers game, but I have so many photos from that one that it deserves its own post.