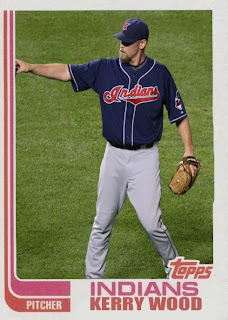 At 4:00 PM today, the MLB trades came to a screeching halt. At the same time, the manager at Topps screamed to card designers "BACK TO WORK! You know we need that Update set by October!"
The Yankees garnered three legitimate stars out of the deal. Berkman I already talked about. Let's meet the other two. Guess what- THEY'RE BOTH CLEVELAND INDIANS! That'll send the "I hate the Yankees" posts a-blazing!
Austin Kearns was the Yankee trade that I wasn't happy at all about. Austin Kearns is like the Owen Wilson of baseball. Sure, he does a lot, and he's on a lot of good teams, but at the end of the day he's annoying! (Although I don't think Austin Kearns talks like an idiot). But, I'm sure he'll be able to fill in a hole or two on the team. Sad to say it, we need a guy like Kearns. I don't know if he can hit much, but this move wasn't about offense.
Kerry Wood was a little more impressive in my opinion. You see, the Yankees are in need of set up men. If the pitcher is tanking halfway through the game, you can't just leave him in there. You know what we have for middle relievers? We have Chan Ho "Oh, I'm Japanese and that makes me good- NOT!" Park, a couple of young guys and Joba, who suddenly can't pitch for his life. We were in desperate need of Kerry Wood, and it's a nice deal. Of course, if the deal happened about 10 years ago, then maybe we'd be more interested.
Still, it's pretty cool that the Yanks got three stars that they needed. Of course, none of them are staying for 2011. Three months may be it for these guys unless they can make themselves useful.
Posted by Jordan at 6:35 PM
Labels: Austin Kearns, Indians, Kerry Wood, Yankees