That's what I call an action shot 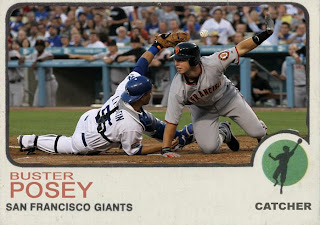 Throughout my past Customs things haven't been going on. Basically, the guy gets a hit, the guy makes a catch, the guy strikes out, the guy pitches, etc. I've added a few action shots to the mix, like the shot of Buster Posey above. And a few shots coming up are much cooler (David DeJesus is tomorrow, followed by Hunter Pence, and quality is really faithful to their eras)
Now, onto the man on the card. Buster Posey was labeled this year as the next big thing. Every Topps set has one- a rookie card of a guy in the base set who people know will be good (Case in point- Ryan Howard, David Wright, Alex Gordon, Troy Tulowitski, Joey Votto, David Price). Buster Posey was billed as Card #2 in the set this year, after The Prince of Fatness, Prince Fielder. I saw Posey twice this year, and he was red hot in both games.
And that action shot always seems to personify him. Always leaping for home, and always ending up safe.
Tomorrow- One of the coolest customs I've ever done.
Posted by Jordan at 10:18 AM
Labels: Buster Posey, Custom Cards, Giants