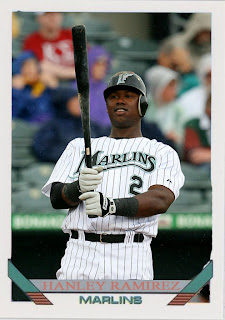 There's no way I'd be showing you a custom of a filthy Red Sock, so I gave you the runner up. Hanley was pretty damn good last night, decking more homers than Corey Hart, Nick Swisher and others. It was a really great game.

The Celebrity/Legends Softball game however...that was hilarious. I snuck a peek at it after the Derby, and I saw the amazing feat of MC Hammer hitting a homer off Jennie Finch, and Jennie Finch blasting one off Chuck Finley. Plus, lotsa Hall of Famers like Ozzie, Rickey, Rollie Fingers, Dave Winfield, Paul Molitor, Gary Carter, Mike Piazza (Okay, he's a Future Hall of Famer, but he counts).

I'm pretty sure the resident blogger heckler's gonna kill me for that one.
Posted by Jordan at 9:36 AM
Labels: Hanley Ramirez, Home Run Derby, Marlins