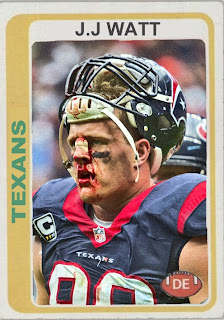 Another week, another set of predictions. Only last week, I did an awful job, making a lot of rash decisions that made me look very bad after the fact. I looked just as bad as JJ up there. But still, since I live to serve, I might as well fortell another week of NFL matchups.

Saints vs. Bears:
Who should win: Saints. These two teams have been absolutely surging this year, and both have been performing very well, even in losses. However, in initial scrutiny, it looks as if the Saints are the better team, as they currently have the better record, and Drew Brees is on fire this year. However...
Who will win: Bears. I know, I just spoke volumes about the Saints, yet I have a feeling the Bears are going to come out on top. I have no idea how, I just have a gut feeling that something's gonna happen tomorrow that's gonna put the Bears out in front. Besides, I would usually put the Saints and be wrong. But it's a very close looking matchup.
Overall: Bears over Saints, by a very close margin.

Patriots vs. Bengals:
Who should win: Bengals. I love what the team is doing this year, and I think they're performing better than they did last season. I think Dalton is slowly becoming a great quarterback, and the offense is red-hot. They've had a lot of really nice wins lately against good teams, which means they could do well here.
Who will win: Patriots. For some reason, even if they have a depleted squad, the Patriots are steamrolling the competition this season. They could very well have another breakthrough season, that'll likely end them up in the playoffs. Today will be another victory, unless something awesome goes on.
Overall: Patriots over Bengals, somehow.

Lions vs. Packers:
Who should win: Packers. For some reason, the Packers have gotten off to a lousy start, and that's because the qualities that made this team great in 2010 have all left. This week would be the perfect week for them to redeem themselves, and finally get a nice division win here.
Who will win: ...though, that's probably not going to happen. Lions. The Lions have been killing it this season, as evidenced by last week's win over da Bears. I think that they'll have another decent showing tomorrow, and probably end up on top.
Overall: Lions over Packers.

Chiefs vs. Titans:
Who should win: Chiefs. For some reason, Andy Reid's Chiefs have been killing it this season. Currently they're 0-4, and again, they're up against another middle-of-the-pack team. The Titans have won some games, but they're in no way spectacular. The Chiefs should have no problem here.
Who will win: Chiefs again. The way the Chiefs have been playing is smart, and their offense is a little more stacked than the new, rebuilding Tennessee offense. Plus, and I feel like I say this every week, the Titans are generally depleted, relying on rookies and untrusted talent. The Chiefs have rebuilt themselves to a point where that's no longer an issue.
Overall: Chiefs over Titans, by a large margin.

Seahawks vs. Colts:
Who should win: Seahawks. There's a reason why everybody predicted the Seahawks to win the whole thing: they have one of the strongest offenses in football right now, and one of the most reliable defenses. They really have everything together, and while they showed a few cracks last week with the Texans, this week they have a less formidable opponent, yet still pretty good. Initially, when you're balancing the two just on the outside, the Seahawks come out on top.
Who will win: Seahawks. The Colts are a great team, but they're being outmatched this year because as great as they are, they're not at a point where they can just run away with every game. They've lost a few games. Their quarterback is not Superman yet. The Seahawks could definitely take advantage of all this today, and I think they will.
Overall: Seahawks over Colts, though it'll be relatively close.

Jaguars vs. Rams:
Who should win: Rams. In a battle of the two teams that were atrocious last year, I'm guessing the one that's been less atrocious in the past few weeks will come out victorious. For whatever reason, Sam Bradford really got his stuff together this season, destroying the woes of 2011 and 2012, and finally getting to the stuff that the Rams wanted when they picked him first overall. Despite their 1-3 record, they should have no trouble with the awful Jags.
Who will win: Rams again. Simple math, people. These are the 2013 Rams going up against the 2013 Jaguars. One sorta outweighs the other.
Overall: Rams over Jags, though it will be a low scoring game.

Ravens vs. Dolphins:
Who should win: Ravens. The records don't show it, but the Ravens are the better team. They're a more tested, and durable team, and they rely on a lot of the stuff that got them to the Super Bowl last year. The Ravens should have it.
Who will win: Surprisingly, the Dolphins. Both teams are really good this year, but the Dolphins are inclining at the exact second that the Ravens are declining. The Dolphins are winning games because they're finally younger and quicker than a lot of the competition, and Tannehill's finally breaking out. This may be a very, very controversial pick, but I'm going with my gut and saying the Dolphins.
Overall: Dolphins over Ravens, by a slim margin.

Eagles vs. Giants:
Who should win: Eagles. You know, this is probably my biggest land mine this week. I have a situation that seems so goddamn predictable, that seems like it'll go 100% according to plan, yet I have the knowledge of how fickle the Eagles are in going according to plan. In all honesty, the Giants are god-awful this year, while the Eagles are slightly less god-awful, yet we are still dealing with the Giants and the Eagles, and the Giants are generally good at beating the Eagles. You can see now why this is so tough. Still, I have to say that going in, the Eagles look good.
Who will win: Screw it, Eagles again. They have a better offense, or whatever. They've won a game. They have a more with-it head coach. They really SHOULD be able to win this game, and everyone is predicting that they're GOING to, but keep in mind, THESE ARE THE PHILADELPHIA EAGLES WE'RE TALKING ABOUT! I'm not 100% sure that they're going to win, as much as I want them to. But still, I'm predicting they will.
Overall: Eagles over Giants. I hope.

Broncos vs. Cowboys:
Who should win: Broncos. In the battle of teams that were amazing in the 1990's, the one that's amazing in 2013 will demolish the other. There isn't that much to this one. Peyton Manning is excellent this season, possibly better than he was in 2012. Curtis Painter must feel really bad about himself now.
Who will win: Broncos. As fickle as they are this year, I know for a fact that the Cowboys aren't as good as the Broncos. Even if the Cowboys are kinda close to the top of the NFC East (which isn't hard, as all 4 teams are awful), they're still not good enough to win here. I don't care what anybody says.
Overall: Broncos steamroll Cowboys.

Texans vs. 49ers:
Who should win: Niners. Because they deserve a win here. Even if this is a tough squad, they really need to reestablish their name, their winning nature, because the first 4 games did a lot to tarnish that. Kaepernick is down a little this year, and the offense isn't as hot as it was, but they need to really pull through here, despite how good the Texans are.
Who will win: Well, the Texans. Because as of right now, they are the better team. They're just difficult. There isn't too much character, or backstory, or funny stuff: they just win games. Actually, I lied, listening to JJ Watt wired is quite the experience. I highly recommend it. Almost as good as Jim Harbaugh. Still, the Texans are the tougher team, and they'll probably win it.
Overall: Texans over Niners in a squeaker.

Jets vs. Falcons:
Who should win: Falcons. Okay, this isn't even funny. The Jets are supposed to be awful this season, and yet they keep winning games. They seriously need to stop that. They're gonna make a lot of people look bad. The Falcons are actually doing pretty nice, however, and since I like them better, they're probably gonna win.
Who will win: Falcons, because they're easily the tougher roster. The Jets have a lot of holes, a lot of rookies, a lot of people that shouldn't be on a roster. The Falcons have a trusted team, with a great offense and defense, and solid QB. They should win it.
Overall: Falcons over Jets. Please.

So, those are my predictions. Let's see how right/wrong I am.
Posted by Jordan at 12:08 PM