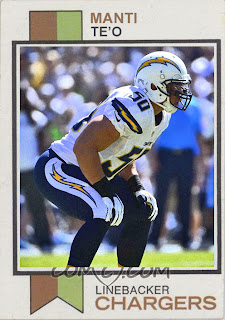 I know Te'o might be a weak choice for a Predictions headliner, but my other choices were an injured DaMarco Murray, and a bye-weeked Charles Woodson. I'm sticking with Te'o.

This week is another exciting week for football, as the matchups are tougher, and the lines are beginning to form. As always, let's see how wrong I am in trying to predict them.

Buccaneers vs. Falcons:
Who should win: Falcons. I know they haven't really had the best record so far, but there is still hope in that roster. Matt Ryan is a great quarterback who deserves better. Tony Gonzalez is still playing well. The team is just weak this year, but I think the Bucs are a team they can beat.
Who will win: Falcons again. Last time the Bucs went up against a middling team, that team was the Eagles, and they beat the snot out of them. The Bucs are getting lower every week, without the help of Josh Freeman, and without that much roster unity. The Falcons are probably going to beat them here.
Overall: Falcons over Bucs.

Bengals vs. Lions:
Who should win: Bengals. I'm astonished as to how well the Bengals are playing this year. I mean, last year they were okay, but this year they are killing everybody. They went up against the Packers a few weeks ago and completely obliterated them. Andy Dalton is on top of his game right now, so that might account for things. I realize that they're playing the Lions, but the Bengals, looking forward, are the better team.
Who will win: Bengals. This game will probably be close, as we're talking about two teams that have been really good in 2013. However, I'm giving it to the Bengals solely because the Lions seem like they've been slowing down in the last few weeks. But it could go either way.
Overall: Bengals over Lions, in a very close margin.

Bills vs. Dolphins:
Who should win: Dolphins. These are two teams that were middling last year. One has definitely stepped up, that team being the Dolphins. The other started strong, and are basically sliding back downhill without EJ Manuel. I think the Dolphins look like the better team here, and Tannehill is improving on his 'eh, we'll take it' rookie year.
Who will win: Dolphins. The Dolphins' offense has really surprised people, and I think they're stronger than the Buffalo defense. Also, the Dolphins seem like a tight team this year, while the Bills are getting farther apart every week.
Overall: Dolphins over Bills.

Patriots vs. Jets:
Who should win: Patriots. We're talking about the biggest, baddest NFL team out there. Like, the Arnold Schwarzenegger of football teams. And they're going up against the Jets.
Who will win: Patriots. I should give the Jets more credit than that. Under different leadership this year they've become a better team, and they're finally winning games again. The only downside is that they're playing the Patriots, who are impossible to beat, unless you're the Saints.
Overall: Pats over Jets, a high scoring match.

Cowboys vs. Eagles:
Who should win: Cowboys. This is one of the most heated NFL rivalries, because we have two fanbases full of hot air fighting each other. These two teams aren't necessarily amazing this year, but they've been doing better in the last few weeks. By far glance, the one with the better record currently will take it.
Who will win: Eagles. DeMarcus Ware and DaMarco Murray, two of the strongest assets on the Cowboys, are not playing today. Nick Foles, on the other hand, is playing today, along with LeSean McCoy, DeSean Jackson, and a bunch of people who would like to beat a team when they're down.
Overall: Eagles over Cowboys, by a wide margin. The game will end with a shot of Jerry Jones weeping on the Jumbotron, yet still trying to sell his tears as the greatest tears in the world.

Bears vs. Redskins:
Who should win: Bears. One of the many catalysts of a tough NFC North, the Bears have been absolutely killing it so far, thanks to an impressive year by Jay Cutler. Now, they're going up against a team who they know is weaker than them, and they know will be a stronger force in the 2nd half. It should be easy.
Who will win: Bears. The Bears have a stacked offense, which should be called unfair. They have some amazing threats in their offense, including Brandon Marshall and Matt Forte. They also have a strong defense. The Redskins have some good players, and a QB who isn't as strong as last year.
Overall: Bears over Skins.

Chargers vs. Jaguars:
Who should win: Chargers. This is a battle between a team that has defied expectations, defeated teams that were hard to beat, and actually added truth to the rumor that they're winning the whole thing because they played the Eagles in their home opener, and the Jaguars. No contest.
Who will win: Chargers again. The Jaguars have absolutely nothing, except for Maurice Jones-Drew, and he's not playing like he always does.
Overall: Chargers over Jags. Then Manti will start dating some of the Jacksonville fans, which is weird, because nobody comes to games.

49ers vs. Titans:
Who should win: 49ers. I know they're not playing like they did last year, but they're still winning games. Colin Kaepernick is still playing at least partially well, and the team is basically a lot of the same elements that gave them the NFC last year. Also, even if the Titans have Jake Locker back, they're still playing a team that is miles ahead of them in ability and performance.
Who will win: Niners again. That defense should probably stop any and all decent runs by rookies.
Overall: Niners over Titans, wide margin.

Browns vs. Packers:
Who should win: Packers. Because it's midnight for the Browns, and they're just about to turn back into their normal selves. Also, they're playing the Packers.
Who will win: Packers. Even if they were playing like they did the last few weeks, they'd still be up against one of the toughest teams in the NFL. Weeden or no Weeden, that's tough to beat.
Overall: Packers over Browns.

Texans vs. Chiefs:
Who should win: Texans, because I have one shred of belief that they could actually have a decent year this year.
Who will win: Chiefs, because Andy Reid crushes dreams.
Overall: Chiefs over Texans.

Ravens vs. Steelers:
Who should win; Ravens. This isn't too hard. The Ravens, despite losing a few games, have miraculously returned to form, and are back to being a powerhouse. The Steelers were in the Super Bowl three years ago, and everything's beginning to slide back downhill for them, as all the integral parts of their offense and defense that made them great are all gone, with the exception of Big Ben and Polamalu.
Who will win: Ravens. That defense isn't going to let Antonio Brown get the ball, even if that's all Roethlisberger throws to.
Overall: Ravens over Steelers.

Broncos vs. Colts:
First of all, all the newscasters and sports people are gonna be talking about how this is the matchup of the season, Manning coming back home, and how it's gonna be so unpredictable in every way. WELL..
Who should win: Broncos.
Who will win: Broncos.
Suck on that, sportscasters.
Overall: Broncos over Colts. You know, because sportscasters really hate common sense. And I bet Bradshaw's still gonna predict the Colts to win, because he's an idiot.

Vikings vs. Giants:
Who should win: Giants. In the battle of the inexplicably horrible teams, it seems rational to pick the team that hasn't won a game to win over the team that just lost some of its core performers to injuries. Therefore, as controversial as it is, I'm gonna do that...
Who will win: Vikings. Yeah, I'm gonna do that when the Giants play the Cowboys again.
Overall: Vikings over Giants.

So yeah, those are my predictions. Hope I'm right on some of them.
Posted by Jordan at 12:46 PM