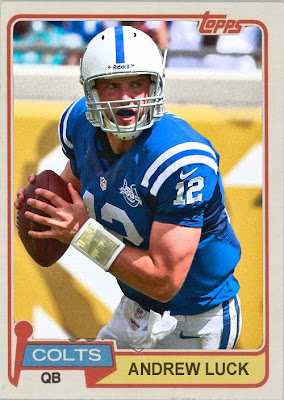 Ugh. I hate being wrong.

I mean, you knew that. You hear me blab on and on about being wrong so many times that Jim Davis is calling in and telling me the gag's overused. But, above all that, I hate being so terribly wrong that it's funny. Take my Melky Cabrera post, which basically said he would fail in 2012, when in reality he won MVP of the All Star Game.

On Sunday, I saw in the schedule that the 8 PM game was Broncos-Colts, a game that was being hyped as a 'tough matchup', which I didn't understand, because this was the Colts going up against an undefeated team, Manning or no Manning.

So, in five seconds, I typed up a brief prediction, to the extent of 'everyone's saying this game's gonna be unpredictable, well BRONCOS WIN IN A BLOWOUT, EAT IT BRADSHAW!'

Okay, the headline didn't really say that. But it was close. And you could hear my head slamming against my desk from several countries over. Somewhere in Saskatchewan, the people could hear my frustration*. Whether they wanted to or not.

However, looking back on it now, what happened to the Broncos this weekend was not pure luck.

(NOTICE #2: The last statement was totally a lie)

I think that the Colts are definitely on the rise, and that Andrew Luck is becoming what everybody said he was going to be at the draft. Last season, admittedly, was something of a letdown for Colts fans, yet I think he could lead them back to the playoffs this year. I don't know if it will happen, but it would be wonderful if it did.

It appears that a lot of people are rooting for the success of Andrew Luck and the Colts.

However, the word is still out on the people of Saskatchewan.

(*- I really need to use this sentence for something someday. I haven't figured out what yet. )

Labels: Andrew Luck, Colts, Custom Cards, football, I can't predict anything can I?