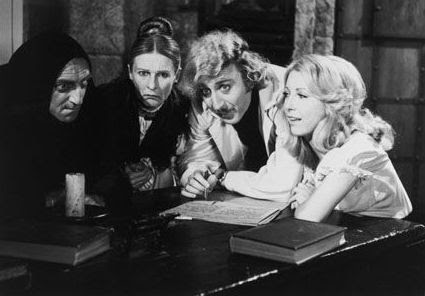 (I do this every year. Deal with it.)

(Bobby Valentine is tied to a table for his awful 2012 season. He looks unconscious. Suddenly, Frau Blucher enters, silently, and begins to undo the barriers on the table. Suddenly, Frankenstein, Igor and Inga enter.)

Fronkensteen: Nevermind that, I was just going to...*FRAU BLUCHER!*
(neigh)
WHAT ARE YOU DOING?
Blucher: I AM GOING TO SET HIM FREE!
Inga: NO...No, you mustn't!

Fronkensteen: Are you INSANE? He'll sink the team again!
Blucher: NO HE WON'T! Not this vun. HE IS AS GENTLE AS A LAMB!
Bobby Valentine (abruptly): TRADE DAISUKE TO CLEVELAND!

(All four are startled.)

Fronkensteen: STAND BACK! Stand back, for the love of God, he's an terrible manager. A TERRIBLE MANAGER I TELL YOU! HE'S GONNA TRADE ELLIBSURY FOR A MOUNTAIN GOAT!
VALENTINE: HEY, THAT'S A GREAT IDEA!
Igor: ...ixnay on the errible-tay
Blucher: I'm not avvraid! I know vat he likes!

(Frau Blucher begins playing the violin, which calms Valentine before he makes the call to the gm, and he sits back down)

(Suddenly Bobby Valentine hits an electrical circuit, and immediately trades for Joel Hanharan. He then yells and begins to bolt out of the room.)

And THAT is how the Red Sox won the World Series...I think.

Oh well. Have a happy Halloween, everybody.
Posted by Jordan at 6:40 PM