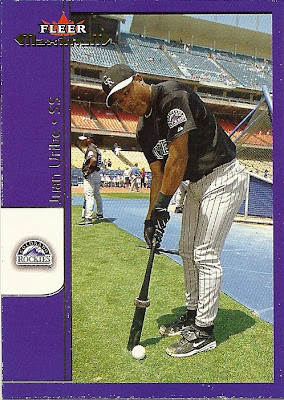 DISCLAIMER: This, folks, is another entry in Nachos Grande's amazing and awesome Blogger Bracket Contest, Round Numero Dos. Which means I'm writing another zany and awesome prompt for a junk wax-ish card. Look at me go.

Juan Uribe repeats the word like it's his mantra. Focus. Just focus. He stares down the ball intently, with the gaze that would rival that of a mighty eagle or Nolan Ryan.

The hole is only a few feet away, and Juan Uribe is already buckling under the pressure. They said it was Tiger's Masters. They all said he'd run away with it again. Well, Juan Uribe is snickering at those critics, though still trying his best to hold steady and not break composure.

He adjust his purple brimmed Colorado Rockies hat, so that it just barely hugs his head. He firms his brow, and takes one last shot at the line between the ball and the hole, sizing it up in his head, where there are no imperfections. Where mistakes are only potential.

As the caddy hands him the putter, the crowd at the Masters hits a deafening silence. Juan can nearly hear the whispering commentators, saying something along the lines of "this is Uribe's last shot to win, or else he'll go back to his day job of standing in for Dee Gordon", all the while making the sport even less exciting than it already is for everyone who isn't a retired professional athlete (looking at you, Jaworski).

Juan Uribe sighs one last time as he sizes up the shot.

He extends his arm outward ever so slightly, giving the ball a nice enough tap to increase the acceleration, but not to send it to Mexico. The ball begins to roll, ever so slightly, toward the final hole, the climactic one that the commentators made everybody shut up for.

All the while, Juan Uribe winces in anticipation, like how someone would wait for a text back from a girlfriend. Juan Uribe wouldn't know how that feels. His only girlfriend left him for Tiger Woods back in '09.

The seconds seem slower than minutes, which seems highly improbable, unless it's a Salvador Dali painting (2 for 2 on Dali shout-outs). The ball continues to roll toward the hole, the commentators continue to whisper so that everyone watching at home must scooch into the side of the TV, and eventually blow out their eardrums once the crowd comes back in.

The ball stops on the edge of the hole. This is exactly what Juan had been fearing for all his years. He squats in nervousness, as well as in an attempt to hide that he's totally wetting himself right now. He clasps his hands together as if to pray to a God that isn't Tommy Lasorda.

Whatever prayers there were, they are answered: as if by magic, the ball lands, with a miniature 'thump', into the hole, meaning the tie that Uribe had been fearing would happen has been averted.

Before Juan Uribe can fully comprehend the situation that he, a former MLB player, has been crowned the Masters champion, before the caddy can attempt lifting him off his feat and hoisting him throughout the unfortunately non-exercising crowd, and before the trophy can be handed over, Juan Uribe's recurring daydream ends, like it always does, abruptly.

Juan looks around, and realizes he is back at Coors Field, surrounded by his teammates, still on a perpetually mediocre Rockies team. He sighs. Buddy Bell calls him over to start warming up.

As him and Helton get warm, despite the fact that it's already warm out, Uribe still longs for his fantasy. He still hopes for what he knows isn't real.

So, as Helton takes a break to sign autographs, and when Uribe knows no one is looking...

"Cinderella story. Outta nowhere. Former Colorado Rockies 3rd baseman...about to become, Masters Champion...IT LOOKS LIKE A MIRAC- IT'S IN THE HOLE! IT'S IN THE HOLE!"
Posted by Jordan at 8:05 PM