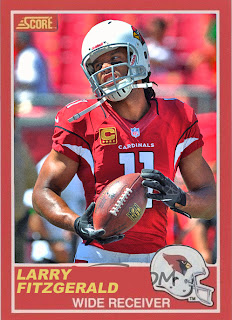 You'd think that 'Carson Palmer today leading a group of mostly unknowns plus Larry Fitzgerald' would be an underwhelming team, but they've actually won some games this year, which is kinda shocking.

I know! Carson Palmer's still on an NFL roster! Zounds!

Look, nobody's acting like the Cardinals are going to outrun the other guys (boy, wouldn't this be ironic in February 2014 if these guys actually win it?), but at this point, it's kinda nice to see that they're winning games. Their last year's QBs were disposed of, as you can see: Kevin Kolb is rummaging around in Buffalo. John Skelton is probably dead. I forget what happened to him.

Larry Fitzgerald is still the star of the team, as he has been for the past ten seasons. I think there should be a law in Arizona that there should be nobody on that roster that's a bigger star than Larry Fitzgerald. Like, if they sign somebody huge, just...just cut them or something. Or cut Larry. Either or.

Man, I should have really made a coherent post. But nope.

Coming Tomorrow (?)- A former Packer paying for his betrayal by spending his season with an awful Vikings team.
Posted by Jordan at 5:51 PM
Labels: Cardinals, Custom Cards, football, Larry Fitzgerald