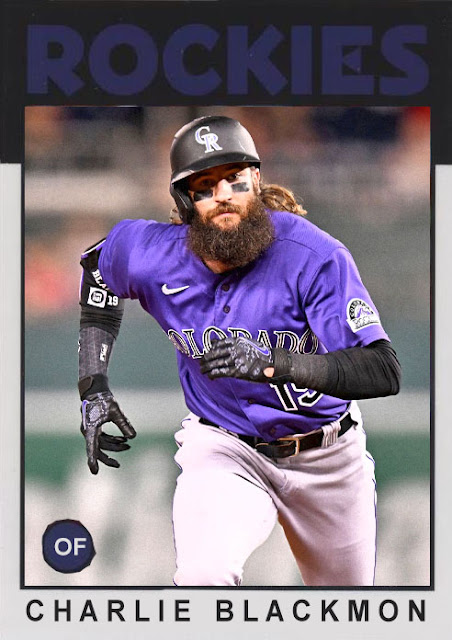 This week in the portion of the NL West that doesn't really matter: the Rockies have caught up to the Diamondbacks in the standings. Neither are really playing electrifying baseball right now, but Arizona has shit the bed enough for the Rockies to join them at 35 wins. This would be tense if it had any effect on the rest of the division, even if they're only 6 games behind the Giants.

And on one hand, Kris Bryant is healthy again, but on the other hand...we are in the fourth month of the season and he's just now beginning to heat up. They could have had 3 more months of Kris Bryant's A stuff, but because of injuries, bad defensive work and general BS, it hasn't happened. And so I suppose they want him to be in better shape this month, but...honestly, at this rate, wouldn't it be funny if he got injured again? Guys like Strasburg and Kyle Lewis, where the anticipation is real for the comeback and then they get hurt again, that's not funny. But something like this, where he's healthy and then oh no he's not...there's something kinda amusing about it.

The injuries aren't even the whole issue. I mean, Bryant hasn't even hit a homer in Denver yet. You have any idea how hard that is to do? I hope he's alright, and he can perform for the Rockies, but man it's looking dire.

The one thing I'll say is that the absence of veteran tentpoles like Bryant [and, ultimately, Story and Arenado] is helping the younger core of this team take more prominence. This season Brendan Rodgers, Ryan McMahon, Yonathan Daza, Garrett Hampson and now rookie catcher Brian Serven are leading the charge, and forming a pretty solid young core that they can build on as they return to prominence in the next few years. But what also works is having enough smaller veterans, like Jose Iglesias, Connor Joe and I suppose C.J. Cron to keep structure going.

What's telling is that Charlie Blackmon is appearing to realize that his role is being more of a formative mentor piece and less of a standout. And to his credit, he has 13 home runs and 44 RBIs, and he's playing pretty well, but he's far from where he was at the middle of last decade. Arenado, Tulo, Story and LeMahieu are all gone, and he's just sort of hanging around, helping this team transition to the next stage. Which is alright, I mean, he still is enough of a fan favorite to keep people coming to games, but at the same time...Cron, Rodgers and McMahon are becoming the faces of the team. Blackmon's contract is up at the end of this season. He could get brought back, but he could also just find himself on somebody's bench next year. And he's gotta be okay with it.

Not a ton of truly happy stories for the Rockies this season, but things could be far worse. And they seem to be heading for better years anyhow.

Coming Tonight: Just a guy who strikes people out who plays for my team.