Christian Walker Comes Out of Nowhere...Again 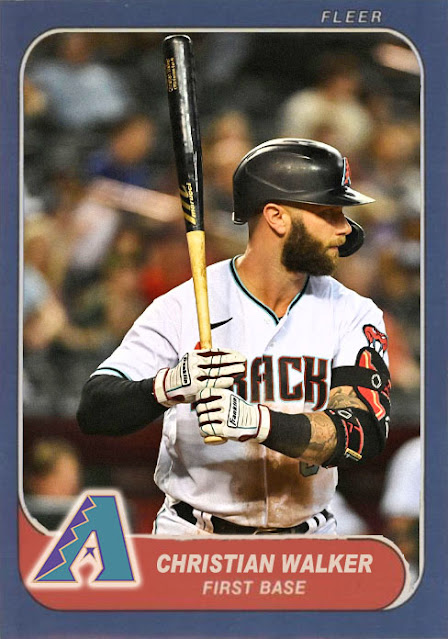 I didn't think it was possible.

Christian Walker already broke out as a surprise power hitter in 2019, after bottoming out with the Orioles years before and hanging on as a bench piece in Arizona. The Diamondbacks called on him out of camp in 2019, Walker responded by hitting 29 home runs and breaking out in a way that convinced the D-Backs that life after Goldschmidt wouldn't be too bad.

Then...Walker sort of faded into the background. Hits 17 home runs in the last two seasons combined. Convinces people that his 2019 power hitting year was a fluke, makes sure nobody's thinking about him...and then this year he's already hit 19 home runs and has a 2.4 WAR.

So...Christian Walker has come out of nowhere TWICE. First as a breakout in 2019, and now as a comeback power hitter in 2022. I didn't think you could surprise people like that more than once. Especially the Diamondbacks, who don't give people a ton of second chances [Jake Lamb notwithstanding]. So while I'm really happy Christian Walker's having a better season and hitting so well, I'm just really confused as to how he pulled it off. Is he gonna do this again in 3 more years?

The D-Backs themselves I put into the Orioles category of 'bad in the standings but not necessarily bad teams'. The Diamondbacks have a strong three-man rotation core of Gallen, Kelly and Bumgarner, they have Ketel Marte, Alek Thomas, Daulton Varsho and David Peralta all hitting, and they have a steady stream of youngsters they're willing to give a try. Buddy Kennedy is up now, he's doing okay, but at any point the D-Backs could throw Cooper Hummel, Seth Beer, Jake McCarthy or Yonny Hernandez back in.

I do worry about the team losing some of its pitching depth now that Zach Davies is injured. You have a lot of guys like Caleb Smith, Luke Weaver and Tyler Gilbert, who are proven starters in other years, but haven't done well enough starting...this year. Heck, the D-Backs are also starting Dallas Keuchel, and so far he's not redeeming himself whatsoever from his earlier performance in Chicago. I genuinely think Keuchel is cooked [that's fun to say], and the D-Backs just need a guy to eat innings right now, and...like, can he even do that?

I know that the Diamondbacks are away from the pressure chamber of the first three spots of the division, but they at least need to finish with enough dignity to prevent from trading away members of the core. I'm not sure who could go, but there are definitely candidates, and Walker is honestly one of them. We'll just have to see how they do this month.

Coming Tonight: An unlikely rock for a rotation that's been in disarray the past few years.