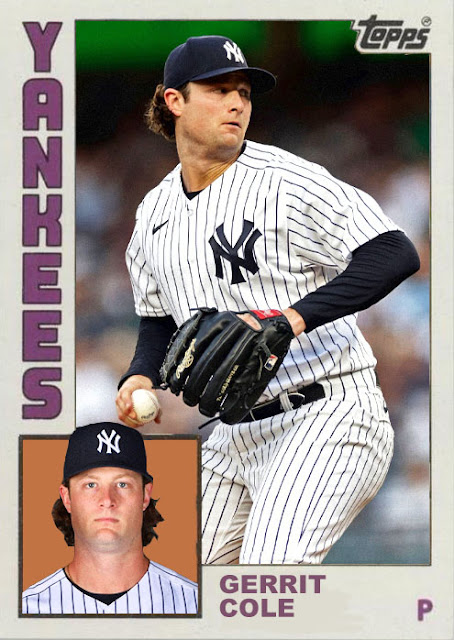 I was thinking June was gonna be the month the honeymoon ended for the Yankees. Like, I figured I'd seen this before, you know, we're good for a while, we give it to Toronto for a month, we get good in August or something, then lose in the playoffs anyway. I think I'm just still very much in denial about how good this team is. Because the second I agree that they're for real, they're gonna make me regret it.

Well, even though there were some losses there at the end of June, and...yes, even if the team was no-hit by Houston [we still really need to figure out how to get past the Astros], the Yankees are still 58 and 22. Which means we are 18 games over .500. And we're scoring an average of 2 runs more than most teams. I'm...like I said, I'm still in denial.

The starting pitchers have been a bit more human lately, but nobody in the rotation has an ERA over 3.50, and three of them have 7 or more wins. Additionally, three of them have more than 90 strikeouts, and it should not surprise you in the least that one of them is Gerrit Cole. I think people have turned on Cole since A.) joining the Yankees and B.) dropping tack. Even if he has good starts nowadays, which he does frequently, it's still seen through the eyes of 'ah, he'd be so much better if he was still on the tack', which really just proves that we're never gonna really settle on a way of punishing people who cheat nowadays. Cole is currently 7-2 with a 2.99 ERA and 117 strikeouts. Yes, he is giving up more home runs than he ever has, but he's still mostly a dominant, strong pitcher, and he's the exact ace we need. And on the nights where he craps out, we still have Nestor Cortes, Jameson Taillon and Jordan Montgomery coming behind.

The depth is honestly the reason why the Yankees have remained this good. Anthony Rizzo was a late scratch tonight, and replacing him in the lineup was Matt Carpenter. While Carp isn't exactly a surefire, he's certainly capable of some great power upsides, so a guy like Rizzo isn't exactly lost. Besides, Carpenter's hitting and Joey Gallo isn't. And all the while, we still have Miguel Andujar, Estevan Florial and Tim Locastro waiting in the minors. I do get the feeling that Tim Locastro, and Andujar honestly, are getting Brandon Drury syndrome, and waiting in Scranton for a year is gonna ruin their self-esteem for a bit, but they will be there if shit goes south at any time this season. People have argued Andujar should be up instead of Gallo. I agree with them.

The Yankees get to play two of the weaker teams in the NL Central and also the Boston Red Sox before the ASG break. They will win games, they will lose games. I think they'll make it to the halfway point with their dignity intact, but the trick will be keeping the momentum going through the rest of the season. This team is amazing now, I want them to be amazing at the end, too.