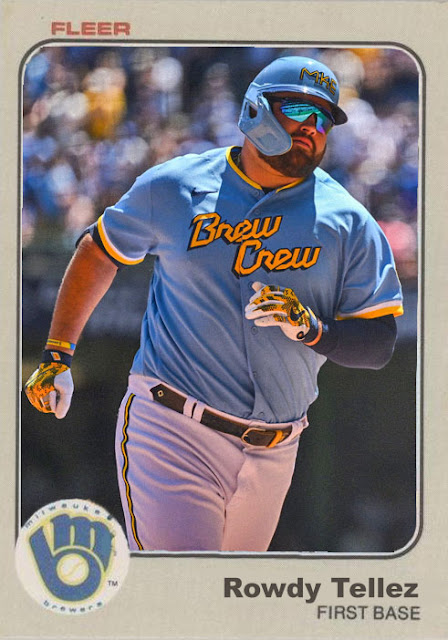 On a team with Christian Yelich, Andrew McCutchen, Luis Urias, Hunter Renfroe and Keston Hiura, the guy with the most home runs is Rowdy Tellez. If you're a Brewers fan, you might be a little disappointed. If you're a Blue Jays fan, you also might be a little disappointed. Only a little, though. Vladdie's still doing pretty well.
Yeah, after landing in Milwaukee last year due to crowding the DH/1B race a bit too much in Toronto, Rowdy Tellez has become a pretty consistent power bat for the Brewers, and now leads the team in home runs with 17. I'll admit that there are a lot of one-dimensional power guys on this team, and I still put him above people like Keston Hiura and even Hunter Renfroe because he's a little more consistent and he strikes out exponentially less. Tellez can do contact work, he can do hard-hit liners, and yet he still leads the team in RBIs with 55. He may not be a great defender, but he's been an excellent lineup presence, and has been a consistent power bat that matches well with pure hitters like Yelich, Cutch and Adames.
Yet the worrying detail about this team is that nobody is hitting over .260. Omar Narvaez has the highest average at .258, and while that's not bad, he's certainly no Luis Arraez. The majority of the team, including veterans like Cutch, recent standouts like Jace Peterson and Victor Caratini, and genuinely good contact hitters like Adames and Kolten Wong, is hitting around .245. Not terrible, but not great. Meanwhile, their competitors in St. Louis are hitting closer to .300, and have a lot of younger standouts hitting for average.
So really the difference is that while both teams have some snakebitten rotations, the Brewers still have big guns like Corbin Burnes, Eric Lauer and Brandon Woodruff healthy, while the Cardinals are missing Jack Flaherty and Steven Matz. Say what you will about the youth in Milwaukee getting their reps in, but the Cardinals have to start Packy Naughton. Jason Alexander is a funny name, but not as funny of a name as Packy Naughton. The Cardinals should trade for Richard Lovelady and have a monopoly on pitchers with funny names.
I still think the Cardinals are the better team, but the Brewers are capable of a lot right now, and their emphasis on power and outhitting their opponents while also limiting their opponents' outputs is a good enough strategy. I guess we'll see if that remains enough of an edge over the Cardinals in the long run. The Brewers have amazing power hitting, but the Cardinals have Paul Goldschmidt.
Coming Tonight: [deep, loud sigh].
Posted by Jordan at 8:21 AM