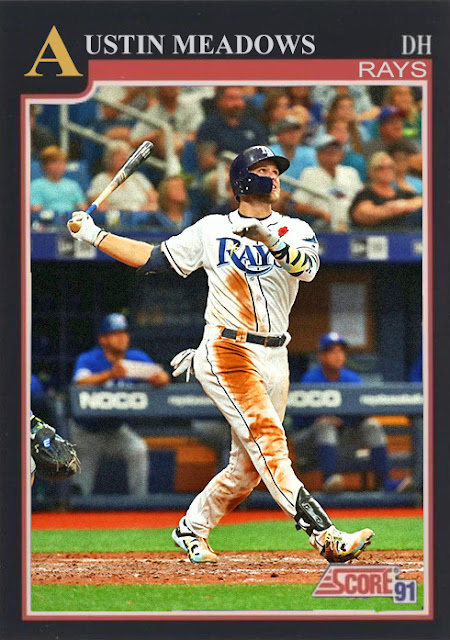 Yeah, you could arguably root the Rays' 2019 come-up back to their new, trusty DH. Who, just a season ago, was making waves as a sturdy outfield bat for the Pirates who wasn't getting any playing time due to the strength of the Polanco-Marte-Dickerson combo (ironically Bryan Reynolds is in the same predicament now that Dickerson's bat. One of those four Bucs outfielders might be traded soon). Once Meadows was given a lineup to dominate, the rest was history.

The best part about Austin Meadows' 2019 success is that it's not showy. He's not outright leading the team like Longoria used to. He's just playing beautiful baseball, hitting insanely well with a .315 average and 12 home runs, and just getting fans in a humble way. It also helps that this isn't a very showy lineup, either. Lots of guys like Tommy Pham, Brandon Lowe, Avisail Garcia and Yandy Diaz, are doing super well without being huge, heralded stars.

And how weird is that? The Rays are one of the best teams in baseball, the guy who's leading the team in home runs is a rookie, and nobody's talking about him! That's rare, man. But I guess he's not the son of a HOFer, so he's not getting the publicity.

Moreover, the best pitcher on the team is not Cy Young award winner Blake Snell, but Charlie Morton, the most underrated pitcher of the decade. He's got a World Series win from Houston, and is coming off two straight 14+ win seasons, and currently has an 8-1 record with a 2.37 ERA and 107 strikeouts, which is 6 more than Snell has. And he's doing so without a ton of fanfare.

The Rays are the single most low-key great team of the season. It's not like the Yankees, where once they start winning again, the trumpets blare and angels sing. And it's not like the Dodgers, who've been getting publicity even for the silly, small things that happen in the background of 2-1 wins. This is just a solid, sturdy-ass team that nobody has anything really to say about.

And that's a complete 360 from last year, where they were a very okay team that just had weird shit happen to them all the time.

I hope the Rays keep it up. They're very fun to watch, even as a Yankee fan.

Coming Tonight: If it weren't for a certain free agent signing from this year, this guy would be the most important Philadelphia Phillie right now.
Posted by Jordan at 10:59 AM