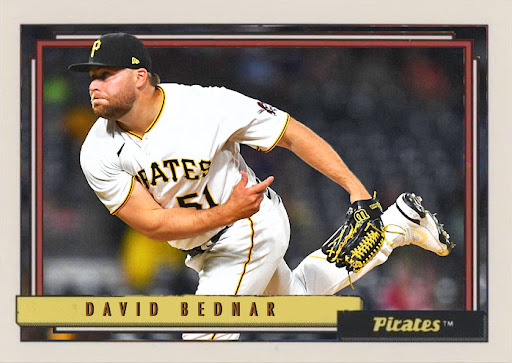 The Pittsburgh Pirates have two of the best players in baseball, one of the best relievers in baseball, and two absolute destructive forces that just came up from AAA. And a lot of other people playing okay. But they are a third place team. I get why Ke'Bryan Hayes, Bryan Reynolds and David Bednar are playing for a 1st place team, but...not with all this around them.

The Pirates, as they have been all season, are just this large pile of mediocrity outside of the big guns. You have people like J.T. Brubaker and Mitch Keller who, while not doing terribly, are clearly only doing so much suiting up for the Pirates. You have lots of guys like Dan Vogelbach, Michael Perez, Anthony Banda and Yu Chang, who probably wouldn't have jobs on any of the other 29 teams. You have great players like Kevin Newman trapped on the IL. Honestly, the most heartbreaking aspect of this team was Canaan Smith-Njigba getting called up, start hitting and wind up on the 60-day IL WITHIN THE SPAN OF ONE WEEK. Life hits you hard and fast. Say what you will about Oneil Cruz and Bligh Madris, but at least they're gonna make it through the week.

Cruz and Madris, by the way, represent a recent spark of hope in this Pirates team, after being called up together a few days ago. Cruz we saw a bit of last season, but here he's reaffirming how powerful he can be, as well as just how fast the baseballs can go flying off his bat. As a rare tall shortstop, he definitely stands out, and I think he'll continue to do so as we go. Standing out more than Cruz in their first week is Bligh Madris, who's hitting .360 with 9 hits and 6 RBIs in his first 6 games. Madris, like Cruz, is known for his contact work, and putting balls where people ain't, and so he'll definitely fit in with the core of Reynolds and Hayes.

Additionally, David Bednar is not only still one of the best relievers in baseball, but this season he is proving that he can close games efficiently as well. In the midst of a bullpen that is...at best sufficient, Bednar has 11 saves, a 1.78 ERA and 49 strikeouts. While it does seem like Bednar is a circumstantial closer, a guy thrown into the ninth in the absence of a proven closer [which the Bucs have not had since Richard Rodriguez left], he's also just a great relief piece in general, and any way of proving his versatility is a very good thing. Even if it took Joe Musgrove to get him, the Pirates must be very grateful of all the wins Bednar has secured for them in the last few years.

The Pirates will likely stay in third for a bit longer, as they're held inert by the rest of this damned division. I don't think they're gonna accomplish a great deal, though I do see a lot of fun storylines emerging, and Cruz, Bligh, Hayes and Jack Suwinski represent the next phase of this team. May it not be crap for as long as this phase.

Coming Tonight: A second baseman who has never been hot for consecutive seasons, but when he's on...watch out.