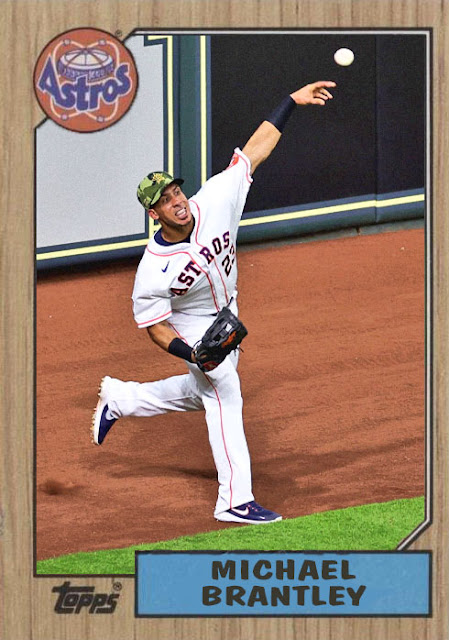 ...yeah, the Houston Astros have a 10 game lead in the AL West, have one of the best records in the AL, and have players in the races for MVP, Cy Young and Rookie of the Year. I don't know what sacrifices they've made to which god to stay this good despite an actual cheating scandal, but the Astros are just doing a ton right.

The bad news is that Jeremy Pena is injured and might be out for a little bit. The good news is that simply slotting either Mauricio Dubon or Aledmys Diaz into short seems to work just as well, and the majority of the lineup is getting the same amount done. Altuve and Tucker have 13 homers, Brantley's hitting .299, and Bregman, while down a few pegs from usual, is still reliable. Additionally, Yordan Alvarez is having an MVP-caliber year, with 19 homers and 49 RBIs, plus a .312 average. In a week where Aaron Judge's average has gone down to .300, and his homers have quieted a bit, Alvarez, has joined him in the MVP conversation, and could very well lap him if this stretch isn't kind of the Yankees.

The pitching is also still pretty volatile, with Verlander and Valdez working on great seasons, Javier and Garcia warming up, and Ryan Pressly still in great closing shape even after an injury. The ability for this team to reinvent itself year after year with new elements working while keeping the preexisting core intact is honestly pretty fascinating, and is the type of competitive play that other teams should study. Y'know, without the cheating part.

Oddly enough, the biggest knock against this team in the last week has been Dusty Baker joining fellow old-timer Tony LaRussa in starting shit over decorum. Apparently after Jose Siri sort of took his time watching a home run of his fly, Baker reamed him out and made him apologize. Over...a home run jog. I am absolutely sick of these establishment managers coming in and telling young people the way it's supposed to be. This shit ran Yermin Mercedes, a fantastic player, clean out of the league before Topps even had a chance to print cards of him. Jose Siri isn't playing too well right now, but this homer was his first big hit in 10 at-bats, and he should have taken every opportunity to bask in it. Rocco Baldelli, Oli Marmol or Aaron Boone wouldn't have given him shit over that. Dusty, if you're gonna ream somebody out, how about either of the 30+ year old catchers who refuse to hit. They're closer to your age anyway.

I can't believe it, I'm doing an Astros post and I'm mad at DUSTY BAKER? I think I should be. Dude's surrounded by sign stealers and he targets a guy for running incorrectly. JOSE ALTUVE is certainly one to talk about decorum.

The Astros will probably continue to win games and piss me off. Hopefully Dusty keeps things like this to a minimum.

Coming Tomorrow- After having one of his best seasons last year, he's got more to love with an even better team.