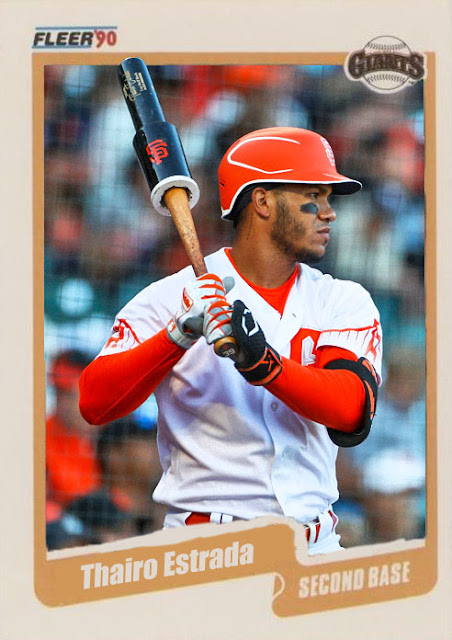 I don't know if you can credit this to Gabe Kapler, or the GMs, or whatever, but the Giants have been able to craft a lot of their team by making great players out of people other teams just hand to them. You look at this team, and they're everywhere. Mike Yastrzemski, Darin Ruf, Jakob Junis, Luis Gonzalez, LaMonte Wade...and now Thairo Estrada, who took a relatively open 2nd base race and became a really fun infield standout.

Thairo Estrada was a Yankees bench guy for years who we never really knew what to do with, and while I kinda figured we'd get rid of him eventually, I had no idea he'd eventually save his career by making camp with the Giants. So far this year, Estrada is .265 with 31 RBIs, and, while not a great defender, is definitely a solid young lineup presence. After Kapler already found Donovan Solano and made him a prominent lineup piece, seeing him do this again with Estrada is kind of incredible.

And the further you go, you see more and more cases of people in useful roles who other teams gave up on. Jason Vosler was a Cubs prospect who didn't pan out, and now he's a bench bat when healthy. Donovan Walton was a Mariners bench guy that didn't work, and now he's been a decent backup infielder. Austin Wynns was a backup catcher in Baltimore, and now backing up Curt Casali he's hitting .242 and providing a decent upside. Heck, the Giants just brought YERMIN MERCEDES up. Yes, someone is giving the Yerminator another chance, and after the trouble he had with LaRussa, I am so happy that it's Gabe Kapler, one of the most progressive and forward-thinking managers in the league, that's giving it to him. Though he's yet to really get going, I do think that Mercedes has more of a chance to do so here than if he was back in Chicago.

And while this team can do little things like that really well, it's still clear how imperative their big moves have been. Signing Carlos Rodon was an excellent choice, as he's not only sporting a 2.70 ERA with 101 strikeouts but he's not overshadowing Logan Webb. Joc Pederson was not only a nice power-hitting pickup for the Giants, but he's been a wonderful clubhouse presence, and the fans love him so much that he's doing super well in the All-Star voting, which I can't exactly dispute.

I think the Giants have a lot to conquer in order to really go after the Padres or Dodgers, but the things they're doing have led to a very efficient, smartly-run team that may be wiser than being streaky. I hope this pays off for them.

Coming Tonight: He leads a 40-win team in RBIs. Most times that might actually mean something.