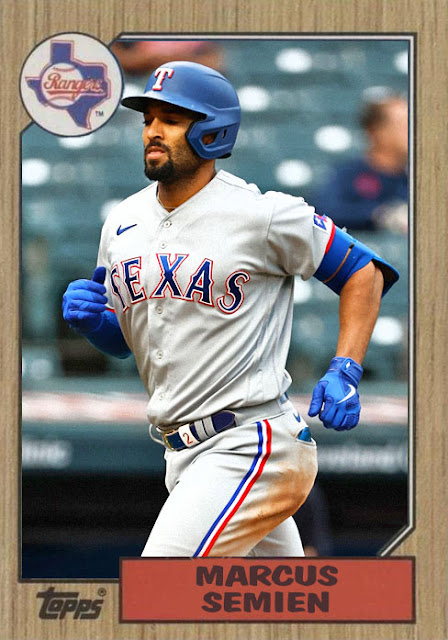 The more time the Rangers spend in second place in the AL West, the more people begin to think they actually belong there.

I've contrasted the Rangers' stay in second to the Pirates' stay in third before, as on the surface these are two teams that are this high up due to the merits of worse teams rather than their own. But the more you look at the Rangers, the more they look like a low-key, modest team that's blessed with two competitors that absolutely shit the bed. I think the Rangers are good enough that when given the position of having the Mariners and Angels fall in the standings, instead of buckling, they do exactly what they have been doing and stay in second.

Like...so many people on this team have improved from where they were in April. Jon Gray, while injured for a bit, has a 4.18 ERA and is slowly moving back to his peak levels of performance. Nate Lowe, though not as top-heavy as he was the last two seasons, has mellowed into a .284 average, 10 homers and 33 RBIs. Even Marcus Semien, who struggled to meet expectations in his first two months as a Ranger, has hit .270 this month with 11 RBIs and 6 homers. I think he's finally heating up, and while he may not be the absolute winner of the Rangers high-spending offseason [that would be Corey Seager], he's becoming more helpful as we go.

It's also not worth understating how good both Martin Perez and almost the entirety of the bullpen has been the entire time this year. People like Joe Barlow, Brock Burke, Dennis Santana and Matt Moore have been this efficient the whole time- we're just noticing it now because the consistency is clearer now that the team's stayed in 2nd. Plus, Adolis Garcia was decent at the start of this season, and now he's slowly pedaling towards his 2021 numbers, as he has 48 RBIs and 15 homers right now.

All this being said, while the stronghold in 2nd does make this team a minor competitor, I'm not getting a great deal of drive from them in terms of the bigger picture of the season. The AL Wild Card race still has the Blue Jays, Red Sox, Rays, Guardians and I suppose White Sox. Plus, the Angels and Mariners could come back still. The Rangers have done a lot well, and have improved so much in the last few months, but I still see them as a perfectly good-to-middle team. Maybe this will change.

Coming Tomorrow- A former Yankee that's been slid into a nice spot for a competitor.