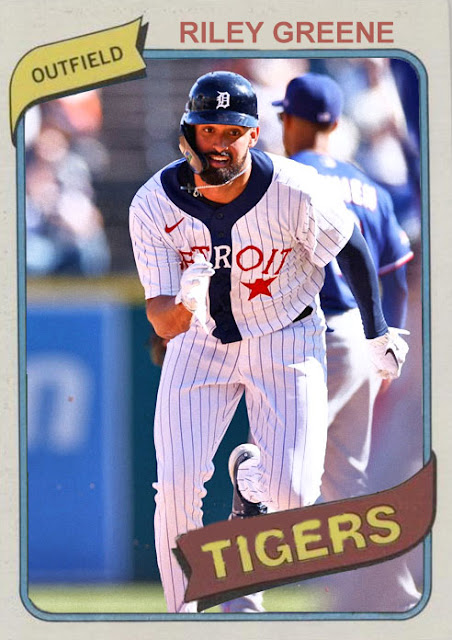 I don't know what it is that makes the Detroit Tigers such a miserable, nondescript team to talk about year after year. I know they're trying. I know they're piping in talent. I know they have a lot of good people on board. But just looking at this roster, where there's only one guy with a WAR above 1.0, and...dear god it's depressing. You mean to tell me that Javier Baez, Robbie Grossman, Miguel Cabrera, Jeimer Candelario, Jonathan Schoop and now Riley Greene can't make this team into anything worth talking about? REALLY?

If anything, this Tigers team is proving that I don't know how WAR works. Miguel Cabrera is batting .300 with 25 RBIs, team-leading, and 70 hits, team-leading. As far as I'm concerned, from what I know about baseball, that's supposed to be a good thing. And yet because he's a 39-year-old baserunner and plays DH, this amounts to a 0.1 WAR. The best hitter on this team, regardless of whether or not he's Miguel Cabrera, doesn't really register in terms of wins above replacement because he doesn't do enough things that 'win games' for the Tigers. And while I trust WAR most of the time in terms of player value, the WAR as a statistic is trying to tell me Cabrera is not valuable to this team just because he's slower and plays DH. He's hitting better than a bunch of 20 year olds, you're just jealous because Cabrera's been in the league longer than you've been an officially regarded stat, WAR.

Riley Greene, for the record, has accumulated a 0.4 WAR since coming up in the majors ten games ago. The much-touted rookie is hitting .286 with 10 hits and 2 RBIs. Already, the contact abilities of the man who hit for the cycle in his first game in the minors are clear to competitors, and he's looking like a very vital piece of this Tigers team, seeing as the guys they signed aren't hitting, Austin Meadows is hurt again and Spencer Torkelson is absolutely refusing to hit for average. Having someone doing what they're supposed to is a breath of fresh air for this team.

And yet they're still doing better than the Royals, who arguably have more standout players but now are without Salvador Perez. The Royals are the more interesting team and yet they're in last. Hm.

I don't expect the Tigers to suddenly spring to life anytime soon. I do have a feeling that there's the possibility of even some of the people not playing well getting dealt at the deadline. Not an overwhelming possibility, but maybe this team is what's making them play so badly. Maybe that'll do it. Probably not, though.

Coming Tomorrow- A Cubs outfielder who got really hot this month.