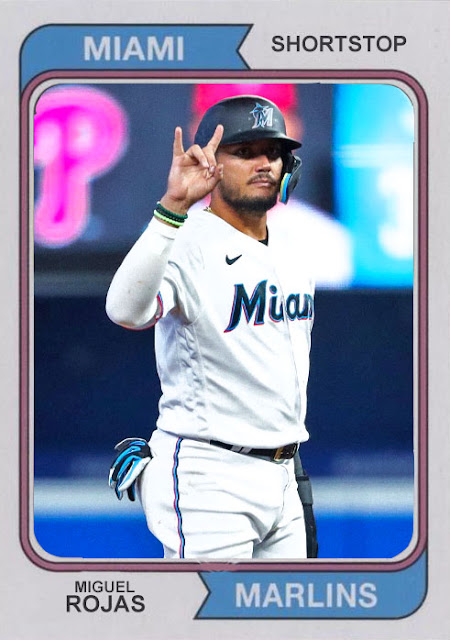 I don't know what else there is to say about this team. And it's June. We're out of narratives for this team and it's JUNE. Aw man. The Marlins were getting good a few years ago, made the playoffs, won a playoff series. Now it's midway through the season and I'm stumped about how to talk about them. Uh, I guess Miguel Rojas is still good?

Like usual, this is a one-dimensional hitting team, emphasizing people like Jesus Sanchez, Jorge Soler and Jesus Aguilar, while still having people like Jon Berti trying to get a word in edgewise. While both of these types of players can coexist, this isn't the kind of contact team where Berti can really be the center of things.

One of the main central points of this team is Miguel Rojas, who's been here since around when everybody left, and he's having a decent enough year. He's still a great defender, and he seems to get along well with younger members of the pack like Jazz Chisholm. I think that he's humble enough to realize that he's not gonna be THE guy for this team for much longer, similarly to a realization that David Peralta's had recently, but he's still helpful enough both at the plate and in the field. Meanwhile, his fellow late-2010s battery partner Brian Anderson isn't getting much done at all. I think a lot of people had really high hopes for him, and I don't know what he has left.

I do get a kick about how flexible this rotation is. Alcantara, Lopez and Rogers are gonna be there, and they have a lot of other options for depth. Braxton Garrett has been doing a decent enough job in the low-rotation work he's been doing, and now Daniel Castano has been stepping up and doing really well through his first 3 starts.

I dunno, there's not a lot to this team. They could spontaneously heat up down the stretch, but there's not a strong enough core, and there's not enough that assures me that they can get past the Braves or Mets. And so we go on unsteadily through the second half with these guys.

Coming Tonight: A Tigers rookie who was supposed to be up to open the season but is making up for it so far.