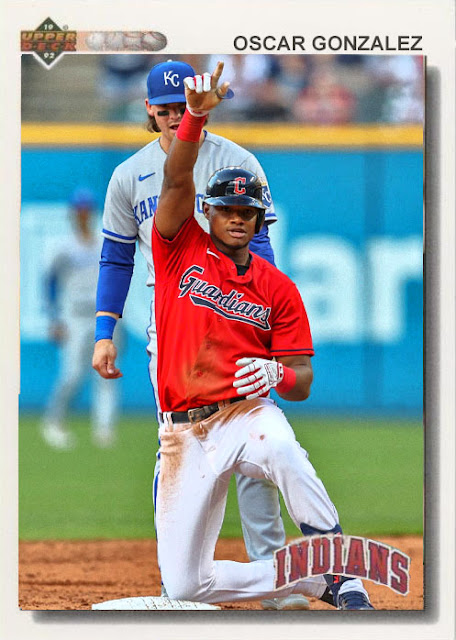 I definitely think it's a compliment when a team that is doing well in the standings has so many different rookies having 'all-of-baseball' stretches over the course of a season. This is a team that's been desperate to rebuild for so long, and now here they are, rebuilding...in first place. How great is that?

The carousel of rookies for the Guardians began in April, when Steven Kwan's contact abilities shocked the league right off the bat, and early ROY talks had Kwan's name on it [this was when Julio Rodriguez wasn't hitting]. Now, and I want to make this perfectly clear, while Kwan has cooled down a bit, he's still hitting .283 with 52 hits, 17 RBIs and a lineup-low 16 strikeouts. Just because other Guardians like Jose Ramirez and Andres Gimenez caught up to Kwan doesn't mean that Kwan isn't a story anymore. It's not like the Jeremy Hazelbaker debacle of 2016, which was interesting for a week before nobody ever heard from him again. Steven Kwan is a really cool contact player, he makes great plays in the outfield, and he's earned a place on this still-growing Guardians team.

Also earning his stripes this year is Oscar Gonzalez, who's been having an excellent June, hitting .323 with 32 hits, 13 RBIs and 2 homers in 25 games. More contact energy, more absolute rip-roaring hits, and another mainstay now in the outfield. Right now a lot of people are talking about Gonzalez because of his work in June, and while I don't think he'll be able to top a lot of other Rookie of the Year cases, I think that, like Kwan, he'll be a formative contact piece for this team.

The other piece of this rookie wave is that it's allowing the Guardians to finally admit that prior pieces are no longer working. Steven Kwan comes right out of the gate kicking ass, and it finally allows the Guardians to release the similar-but-ineffective Yu Chang, who's now in Pittsburgh. Oscar Gonzalez stakes his claim on the right field position, and suddenly there's a valid reason for the Guardians to DFA Oscar Mercado, another contact-hitting outfielder who'd failed to live up to his first month in the bigs. This is the sort of comparative hustle I'd been expecting from Andres Gimenez to deliver unto Amed Rosario, but both Gimenez and Rosario are playing well right now, and any attempt to cull them into a competition has dissolved into Gimenez and Rosario becoming a pretty strong double play combo.

And the beauty of this team, I think, is the emphasis on contact, and on hitting it where they ain't. So many Guardians this year, including Amed Rosario, Steven Kwan, Myles Straw, Owen Miller and even Richie Palacios are more intent on contact than on power. And they're all playing really well right now. That's not saying this team doesn't benefit power hitters, as Josh Naylor's having a great year as well, but it's definitely a team that's built around someone like Jose Ramirez, a five tool guy who's as well known for his averages as his home runs.

The Guardians are doing so much well right now, and they're dominating a division that could have belonged to Minnesota or Chicago. I sincerely hope they hang onto it.

Coming Tomorrow- A pitcher who very nearly walked away with a no-hitter this season, but hasn't let it affect his best season in years.