Death, Taxes and Schwarber in June 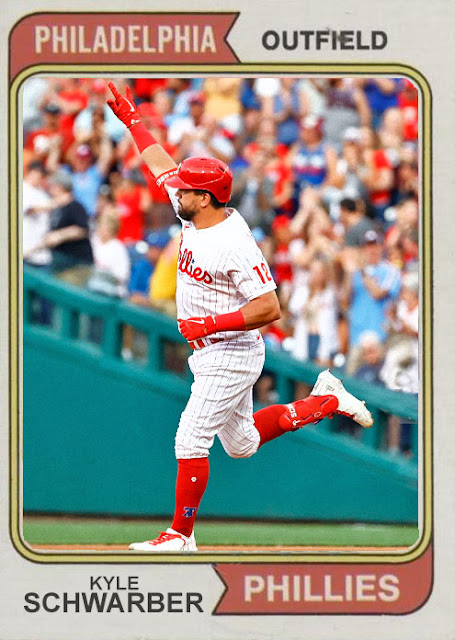 Not everyday where I can write a post about a topic, and as I write it, something that proves its relevance happens. I'm writing a post on how powerful Kyle Schwarber is in June and a second ago he just hit another home run. Wonderful!

And you'd think this would be an upsetting time to be a Phillies fan. You know, Harper just hit the IL, he'll probably out for 2 months or so with our luck, Segura's out for about as long, and the once-strong June streak has hit a rough patch after some games against the Rangers [how the hell is TEXAS our kryptonite this year?]. But since we took 3 of 4 from a very strong Padres team, including the one that I'm assuming we finished out the ninth on as I'm writing this, the momentum seems to be going back up, and we're leaving June with, at the moment, an 18-5 record, which isn't bad at all.

What has definitely helped has been Kyle Schwarber, who is monumentally better in June than he is in any other month. He hits under .200 the first 2 months of the season, and in June he's hitting .276 with 10 homers and 23 RBIs, which has definitely helped this team stay in the race during a month where the top 2 teams are also excellent. Schwarber I always assumed would find his footing in Philly eventually, and even if he's usually a very one-dimensional hitter, he's more than capable of hot streaks, and as last season proved, he can definitely provide contact and average numbers if he gets hot enough. While I don't think this season will be enough for Schwarber to make an ASG roster, he's certainly affirmed a lot of the promise Phillies fans had for him. Just waiting on Castellanos.

This is admittedly an imperfect team, but we're getting a lot more done than usual. Regardless of ERAs, we actually do have 5 guys that can go deep enough into games as starters, and if not, we have people like Nick "The Human Thumb" Nelson and the impressive Seranthony Dominguez to go long and save the momentum. Aaron Nola's having his best season in years and I sincerely hope he's rewarded in some way for it. J.T., Rhys and Didi are on nice tears right now, and Bohm seems to be on his way there. I see enough optimism in this team that it doesn't depress me.

Anyway, the Phils are playing Atlanta tomorrow night and I'll be at CBP to watch 'em there. I sincerely hope they put on a good enough show for me.

Coming Tonight: He has a Rookie of the Year, an MVP, and a shit-ton of home runs.