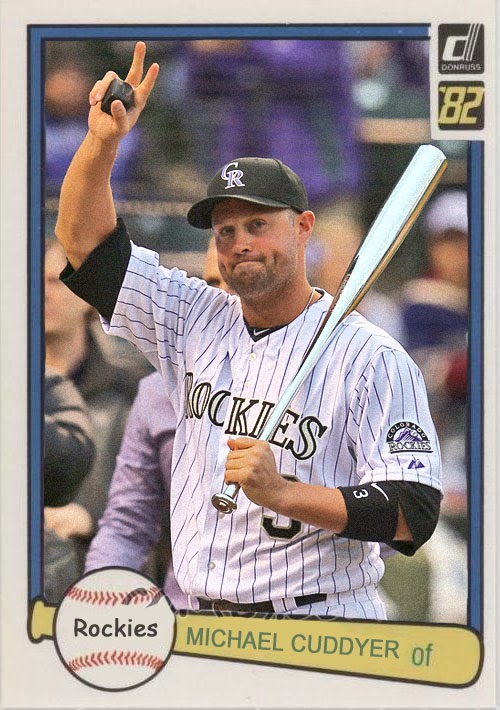 First of all, I love this custom.

Second of all, who the hell called Michael Cuddyer ascending to a near-leadership position in Colorado?

I mean, his 2012 season was terribly lacking, and he never really made too much of an impact in Minnesota, save for a few okay seasons, and an All Star bid. The presence of people like Joe Mauer and Justin Morneau made it impossible for someone like Michael Cuddyer to be a star.

Which is why I was so happy when 2013 happened for him. A streak. An All Star starting nod. A Home Run Derby bid. A nice season. This was nice for someone like him.

And now, Helton's gone, and the team is in need of someone like him, who can be the elder statesman and anchor for a while. Michael Cuddyer's probably gonna be that guy, because he's proven he has the stuff. Justin Morneau's in the picture, but it's flipped from how it was back in, say, 2008. Now Morneau is slumping, and Cuddyer's made it big.

I just hope this season is as good as last for him.

Coming Tomorrow- The new It Rookie for a team that really needs some It Rookies.
Posted by Jordan at 7:32 PM
Labels: Custom Cards, Justin Morneau, Michael Cuddyer, Rockies