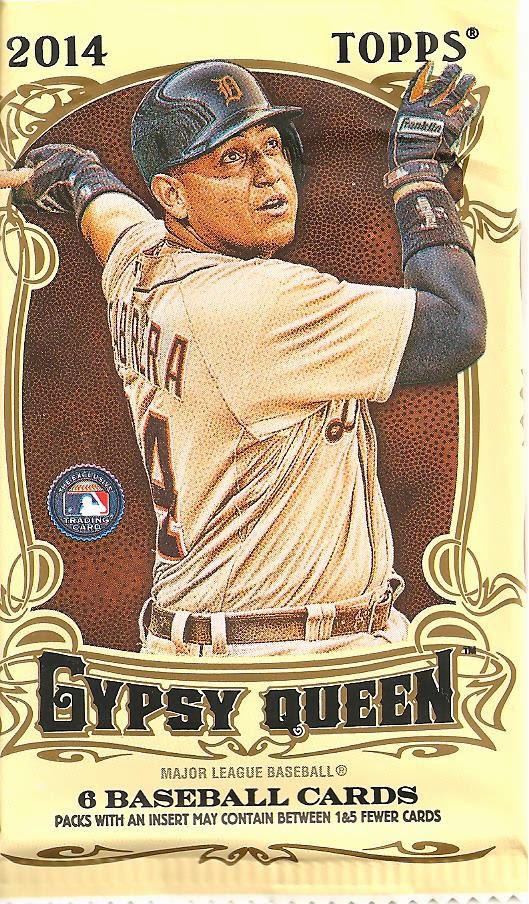 Gyspy Queen is one of those products that seems to always be there in the background, not really being too popular but still kinda there, without any real purpose. 2011's set was obviously the most well-formed, and well-designed. The quality has gone downhill a bit since then, with the 2012 and 2013 sets being disappointing, not including the consistently-stellar inserts.

2014 marks a new breed of success for Gypsy Queen. After breaking a Target discount "rack pack" of the stuff, I was overall impressed with the base set, design, and selection, as well as the inserts. However, it's nowhere close to where the 2011 set was.

Every 'discount pack' comes with three white-bordered non-numbered cards. You can usually get some nice cards out of this one.

Ozzie Smith, Jered Weaver, and Nick Castellanos were my pulls. The two on the left are impressive, especially the Ozzie. The Castellanos is another attempt by Topps to highlight rookies where they don't need to be highlighted.

Onto what counts, The Base Set... 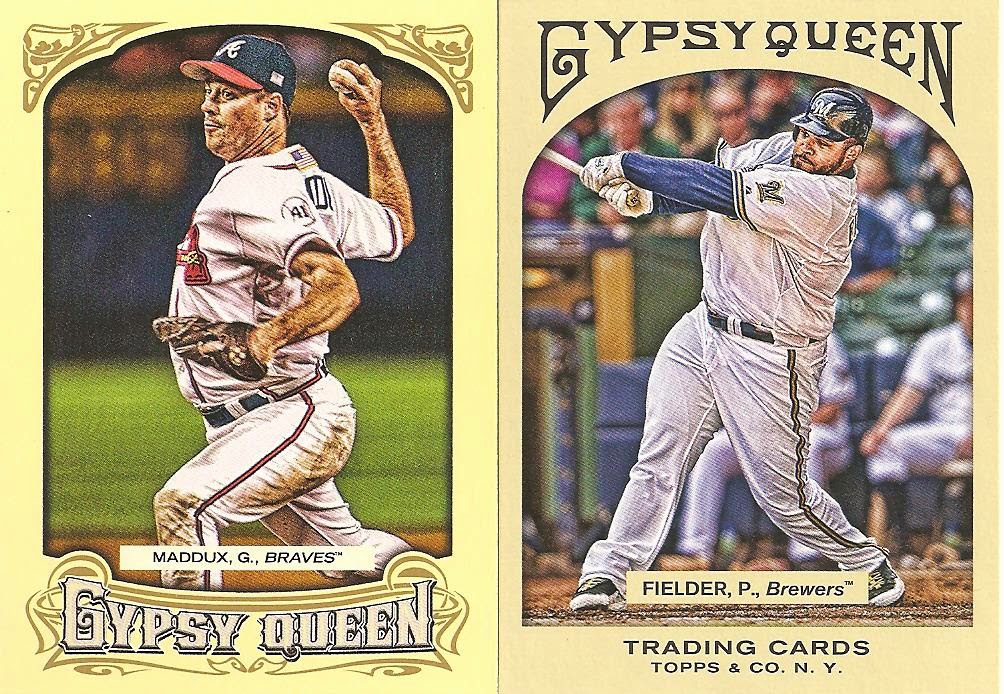 Here, on the left, is one of this year's base cards. It is of Hall of Famer Greg Maddux, and it's awesome that they included a retired star like him. On the right is a card from 2011 Gypsy Queen. It's more retro-ish, and more faithful to the original. But this year's base set is more contemporary. Its aim seems to be to mix 'old-fashioned' and 'awesome', which is sort of working. The Gypsy Queen logo at the bottom isn't as bad as the ones made for 2012 and 2013 GQ, but it's not as authentic as the 2011 one.

What I'm saying is that it's really good this year, even coming close in border hue and graininess of photo. Also, the photography is pretty nice.

Like, the graininess of the filters really adds to the overall quality of the card. I threw these three in because I liked them the most, but a lot of the cards are really nice, and definitely pop, in terms of color. As someone who works with photoshop daily, I can appreciate colors that pop like that.

If you're still not convinced... 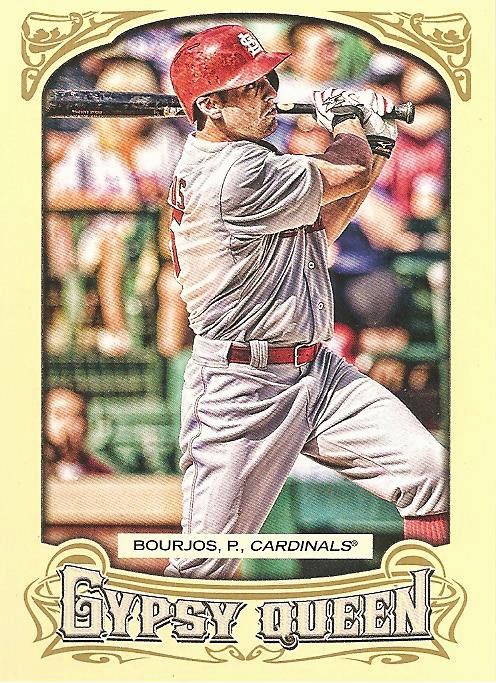 This card is of Peter Bourjos, who was with the Angels last year, and was traded to St. Louis during the offseason. Topps couldn't have photographed Bourjos in that time, making this a definite photoshop. However, as PS jobs go, this one is handled well, isn't too obvious, and isn't sloppily made (like a lot of the ones from the flagship set/Opening Day). In terms of photoshopping, this set is definitely improving from the last few years. 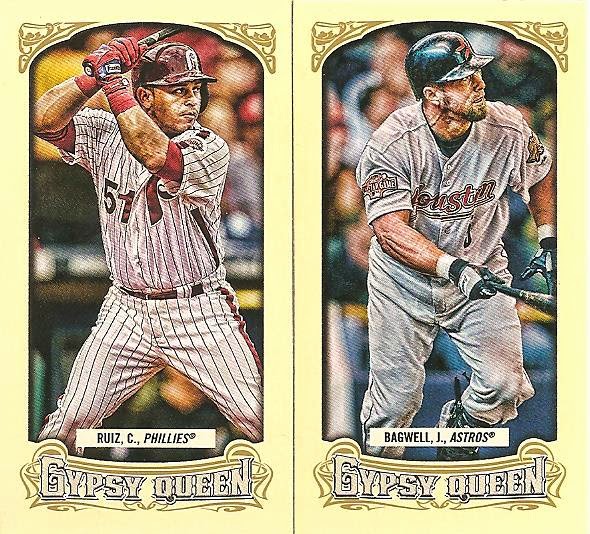 Each pack comes with a mini. Hold your horses, you're NOT counting it wrong. I'll get to the third mini in a bit.

These minis are just truncated versions of the base cards, which isn't bad. I just don't collect them because I don't have any mini pages, so if anybody wants these two, they're up for grabs. One of these days I need to do a Mini Giveaway or something, because I don't really collect them, except for the ones in the Topps Flagship sets. 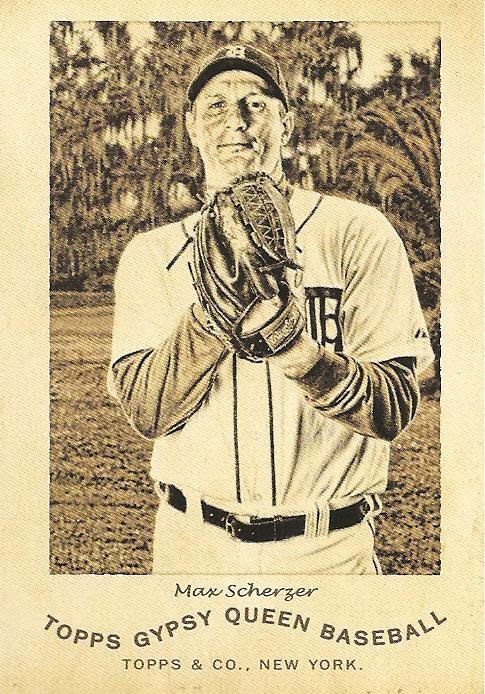 This is one of the newer inserts, a more authentic, sepia-toned Max Scherzer, fresh off his 2013 season. I really like the old-fashioned look of these cards. However, the real winners in this product are the continued inserts from the last few years. Luckily, I got one of those. 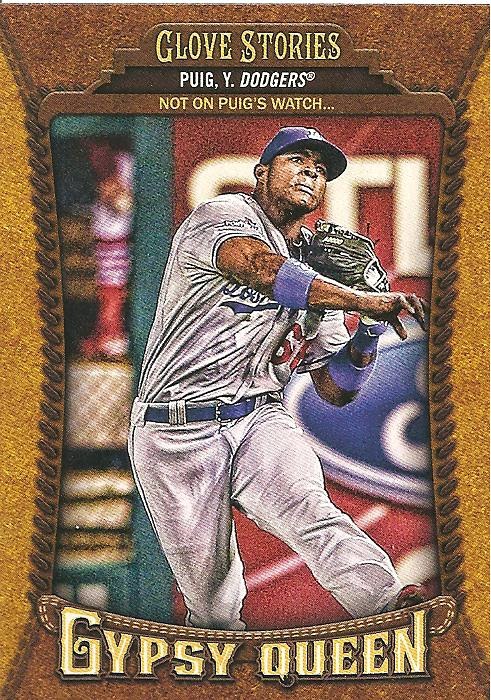 This is a pretty nice one, as you can see the detail put into making the border look really cool. I really enjoy how this card looks, how it seems to really accentuate Yasiel Puig's awesomeness, at least his 2013 awesomeness.

I got two other cards worthy of mentioning, and both are numbered. Let's look at them. 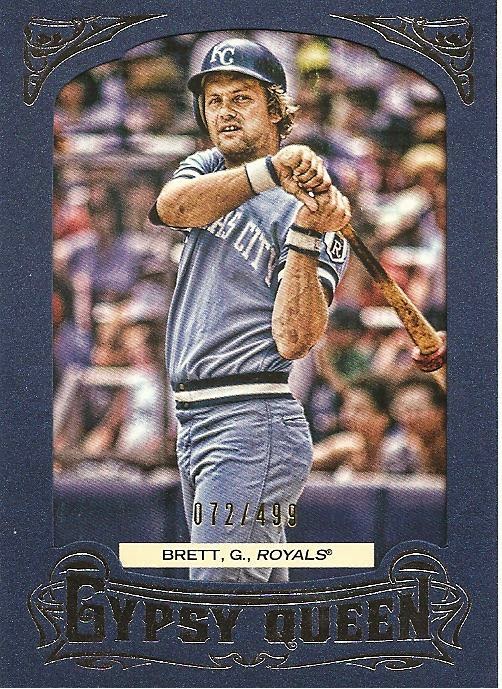 This is a blue-bordered George Brett card, numbered to 499. I let out a nice little gasp when I pulled this. My luck on blue bordered cards has been pretty nice in the past, as I've pulled a Nolan Ryan and a Ken Griffey Jr. This one is just as awesome.

So how do you top a numbered George Brett? 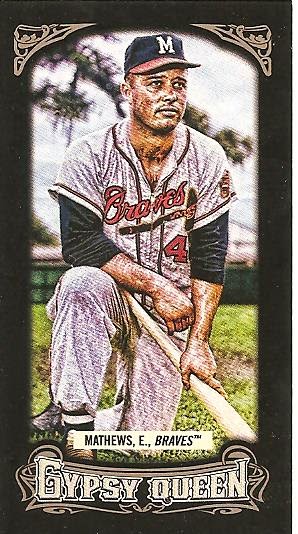 This is a black bordered Eddie Mathews mini. But wait. It gets better.

IT'S NUMBERED TO 199! I got a really low numbered card of a Hall of Famer out of a Target "value pack"

Overall, I was very impressed with the set, and will likely get some more packs before Archives/Series 2 hits.
Posted by Jordan at 2:29 PM