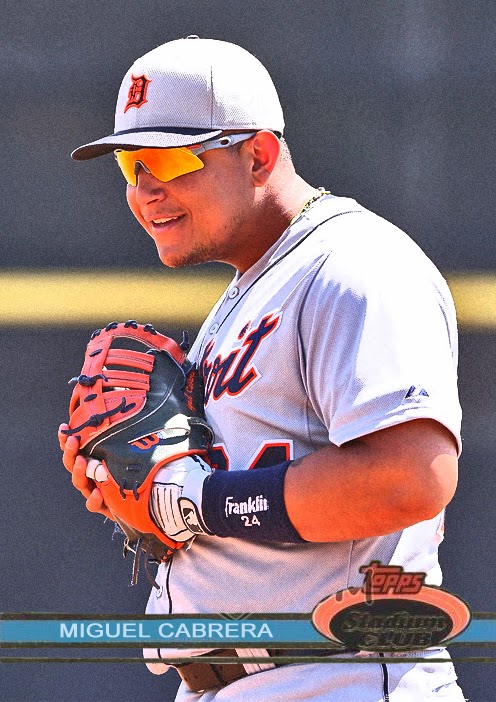 Miguel Cabrera is currently the best player in baseball.

I'm saying this because in twenty years when he's in the Hall of Fame along with a bunch of other people playing currently, this may not be 100% clear. I'm making it clear- Cabrera is Mr. Baseball right now. Nobody comes close.

2014 is Cabrera's chance to REMAIN being Mr. Baseball, because if he has another good season, not only is that Hall of Fame joke from the last paragraph potentially NOT a joke, but the comparisons to long-retired players are gonna come up, and the Tiger dignitaries are gonna start down and bowing.

Winning two MVPs in a row is not easy. I mean, it's easy if you're friends with Jose Canseco, but that's besides the point. Winning two MVPs in a post-steroids world, in a competitive conference featuring people like Mike Trout and Robinson Cano is exceedingly tough. Miguel Cabrera has done this TWICE NOW.

There's a chance that he could have another astonishing season, and make it three. I accentuate the fact that there is a chance, not a certainty. Mike Trout's shelf is looking mighty slim as it is. Also, the AL East is filled with people who usually come close to getting an MVP, yet sadly barely even crack the top 10 vote-getters.

Here I say that Miguel Cabrera certainly CAN do it. I'm not saying he will, but he can.

Coming Tomorrow- That NL Central guy that always seems to do well, yet his team does awful in the playoffs. Not that one. Yeeahhh, that one.
Posted by Jordan at 8:09 PM