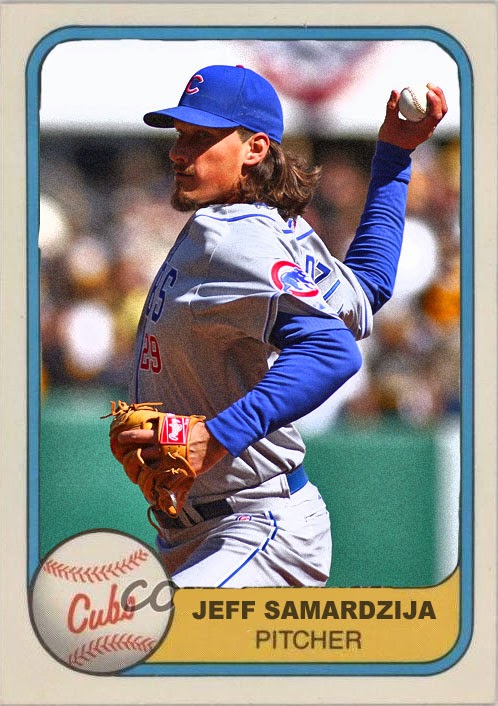 I have nothing really against the Cubs. Sure, we all like to poke fun at them sometimes when they have bad seasons, but I can respect them, and I can respect their achievements. Ernie Banks, Billy Williams, Ron Santo, Andre Dawson, and Fergie Jenkins have all established Hall of Fame careers as Cubs. And now, Wrigley Field is 100 years old.

Which is why it's kind of sad that their current squad is really nothing worthy of mention.

Jeff Samardzija, on any other team, would be the fifth starter. He would be the Kyle Kendrick of any other squad, just there to sift between the heavy hitters. This year, Samardzija is the #1 starter, thanks to last season. Think about this- a guy whose first full season as a starter was last season is now the most trusted starter on the Cubs. I mean, he can pitch well some games, but if anyone had to pick between him and Felix Hernandez, or him and Clayton Kershaw, they'd pick the other one.

I still respect him, because he's on my fantasy team and I need him to do well.

The rest of the team is mostly depleted, save for a surprisingly-surging Emilio Bonifacio, and slowly-sliding-out-of-relevance Starlin Castro. There really isn't much going on. And that's kind of sad.

Think of the last 100 years of Chicago Cubs fans, and how many times they've said 'wait until next year'. And what do they get in the most recent 'next year'? A bunch of prospect that never panned out, pitchers whose contracts aren't up yet, leftovers from other rosters, and no real credibility. I thought Theo Epstein was better than this. I'm assuming the farm system is surging, or at least I hope so.

I mean...the fans are showing up, because it's the 100th season. At least give them a team that keeps them in the seats! At this point, Cubs fans go because of the heritage, because of the past Cubs teams that MADE THEM Cubs fans. Not for the current roster. And that, for the umpteenth time, is sad.

The only thing you can do at this point is hope that it gets better, which is already a routine in Chicago.

Coming Tomorrow- the speedy infielder for the team atop the NL East.
Posted by Jordan at 10:23 PM