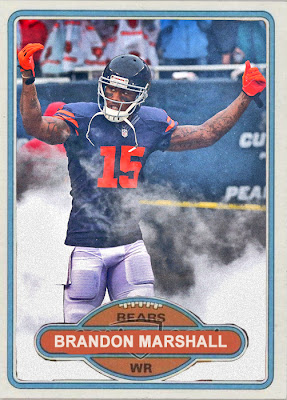 First of all, I love that custom. So effing awesome, even if I don't love the Bears.

Anyway, last week was an okay week for my predictions. I got a lot of easy ones wrong, and I picked the Chiefs to lose and the Eagles to win their respective games. I also said the Niners would crush Seattle, when in reality they'd only score 3 points. Also, the bots really attacked the post last week. Will this become a regular thing? Let's find out:

Packers vs. Bengals:
Who should win: Packers. They're coming off an amazing win against the Redskins last week, where Rodgers had a great game, and RG3 nearly burst. The Bengals are a tougher team than Washington, and I think it'll be very close, but the Packers should be the favorite, as they're the better team.
Who will win: Packers, I think. As I said, this could be very, very, VERY close, and since both teams are terrific this year, it could go either way. Dalton is basically learning from Rodgers at this point, and you could see a series of totally different outcomes play out. Personally, I think the Packers can take it, solely because last week proved that they're still a force to be reckoned with. But I could be wrong, and possibly will.
Overall: Packers 42, Bengals 41.

Rams vs. Cowboys:
Who should win: Rams, because they are not the Cowboys. Week 1 proved that they at least have enough in them to win. Last week was a setback, but that was because they were up against a team that was stronger than them. Now they're up against the Cowboys, who can still win games, but they're not as tough as they used to be. If all goes according to plan, the Rams should take it...
Who will win: ...however, not everything will go according to plan, so the Cowboys. You never know at this point. DeMarco Murray could have the game of his life today. Tony Romo could have a great day. But at the same time, Bradford could be unstoppable. I'm still going with my gut and saying the Cowboys will take it, solely because I have a gut feeling that they will.
Overall: Cowboys 28, Rams 21.

Chargers vs. Titans:
Who should win: Chargers, because did you even see what they did to my Eagles last week? They played a very nice strategic game, that consisted of keeping the ball away from Chip Kelly. And I like that, I think it's smart. It will likely be in play today, against Jake Locker and his misfits. I think that the Chargers will win because last week proved that they can. And who knows: maybe the Eagles home game law will fall in their favor.
Who will win: Chargers. Thinking on paper, this will probably also go their way. Philip Rivers is far more versatile than Jake Locker, though that doesn't diminish the latter's efforts. They have a stronger offense than Tennesee, and then have a bit more meat on them. I think they'll make a huge splash this week, if all goes according to plan.
Overall: Chargers 31, Titans 17.

Browns vs. Vikings:
Who should win: Vikings. This is an obvious one, really, unless something goes horribly wrong for Christian Ponder and the gang here. The Vikings should win because of their opponent being the Browns. The Browns may be a good team, but they don't really have what it takes to be a great team, an elite team. The Vikings are that; they have people like Adrian Peterson to run around and break records. I think they'll pull off another one here.
Who will win: Vikings again. We're talking about one of the stronger offenses in the NFL, a young, yet playoff-experienced quarterback, and a nice defense, going up against the Cleveland Browns. Yeah. I really hope this isn't massive irony.
Overall: Vikings 35, Browns 7.

Buccaneers vs. Patriots:
Who should win: Patriots. Gee, I dunno. BECAUSE THEY'RE THE PATRIOTS. THEY'RE NOT ALLOWED TO LOSE! BELICHECK DOES NOT *LET* THEM! I mean, they're still not as good as they were when they won those Super Bowls, but they're still the friggin' Patriots. The Bucs are a bit of a disappointment this year, as well.
Who will win: Patriots. Even if the Bucs finally have a tremendous showing, and even if Freeman posts his best numbers, they're still playing Tom Brady and the Patriots.
Overall: Patriots 28, Bucs 21.

Cardinals vs. Saints:
Who should win: Saints. 2013 is the New Orleans Saints' comeback season. It is their Permanent Vacation, it is their The Next Day, it is their Steel Wheels. Only difference they have from Aerosmith, Bowie, and the Stones, is that I think they're back to the same level, if not a higher level, then they were back in 2009. Now they have another good matchup, but I think they'll come out on top, even putting into account that the Cardinals butchered the favored Lions. Nope, I'm still picking the Saints.
Who will win: Saints again, because they have so much more going on than the Cardinals. I know that the Cardinals have the comeback season of Carson Palmer going, but a comeback story from one player is a lot less impactful than the comeback of an entire team.
Overall: Saints 21, Cardinals 17.

Lions vs. Redskins:
Who should win: Lions. I think they're going to be excellent this season, judging by what I've seen in the last two weeks. The reason that Stafford's Lions haven't gotten too far as of late is because there hasn't been enough for Stafford to throw to. Now he has Reggie Bush, and this is a partnership that most teams should envy. I think they'll easily overpower Washington here.
Who will win: Lions. Week 1, I say that the Redskins are the favorite. Eagles crush them. Week 2 I say the Redskins could be tough. The Packers have they for dinner. The Redskins could be a tough adversary for Detroit this week.
(please oh please oh please kick their asses, Stafford).
Overall: Lions 24, Redskins 14.

Giants vs. Panthers:
Who should win: Giants, because something tells me they're still a good team. I know they're been routed for two straight weeks, but a win here would be nice for their storyline.
Who will win: Panthers. Because it would be hysterical to see the Giants go 0-3. And also, because the Panthers are supposed to be so much better this season. Though I'm basically saying this knowing it'll be a stretch. I just think that this might happen.
Overall: Panthers 31, Giants 23.

Texans vs. Ravens:
Who should win: Ravens, because I like them slightly better.
Who will win: Texans, because they're the better team.
Overall: Texans 35, Ravens 24.

Falcons vs. Dolphins:
Who should win: Dolphins, because I like the way they're doing things this season. Tannehill's finally improving, they've restocked their offense, and I think they've become a better team, as evidenced by last week's win over the Colts.
Who will win: Falcons, because they've become stronger than the Dolphins, and I think this will translate to them having a much better game than the Dolphins. Both teams are fun, but I think the Falcons will come out on top.
Overall: Falcons 28, Dolphins 21.

Bills vs. Jets:
Who should win: Bills. I know this is a battle of two subpar teams with rookie quarterbacks, but I think the Bills are definitely more favored, solely because the Jets are, well, the Jets. They're obviously not as good as they were in 2010, and they're obviously only going to get worse and worse. Plus, their quarterback changes by the day, and they're really unreliable. The Bills are slightly stronger, and have more elite faces.
Who will win: Bills, barring catastrophe. EJ Manuel is much better than Geno Smith, at least in the NFL. Just putting that out there. Also, the Bills have a much stronger offense than the Jets, and that will probably be the deciding factor.
Overall: Bills 19, Jets 10.

Colts vs. 49ers:
Who should win: 49ers. Both teams were delivered setbacks last week, so really it comes down to which team is better, and this case I'm giving it to Kaepernick's Niners. They have the strongest defense in the NFL, and they have a surging, prominent offense. The Colts are being picked dry more and more every season.
Who will win: Colts, because even the NFL believes in irony. This may not happen, and the Niners may mop the floor with Luck, but something tells me the Colts are gonna have a surprise victory, and come out on top suddenly. This is a long shot, but who cares.
Overall: Colts 21, Niners 14.

Jaguars vs. Seahawks:
Who should win: Seahawks. There's a reason everybody's predicting them to win the whole thing. Their quarterback is excellent, they just restocked their offense with a major threat at WR, adding to the already stellar offense. The Jaguars are...the Jaguars. This one should be a no-brainer.
Who will win: Seahawks. Going in terms of schematics, the Hawks will outmatch the Jags in most categories, including QB, offense (as in aside from Jones-Drew), and especially defense, with no offense toward rookie Luke Keuchly Joeckel.
Overall: Seahawks 35, Jaguars 10.

Da Bears vs. Steelers:
Who should win: The Bears. In the last two weeks, the Bears have gone up against two teams favored to win, and made upsets. They're been strong every week, and Jay Cutler is totally redeeming himself for two seasons of underperforming, by his standards. I think they'll have no problem with the Steelers.
Who will win: Bears. The Steelers have basically three star players left: Ben Rothliesberger, Troy Polamalu, and Heath Miller. I know they have a lot of young running backs and recievers, but these people will either be dealt or out of the pros in five years. The Steelers are an aging team, nowhere near the level they were at in 2010. The Bears will easily defeat them.
Overall: Bears 42, Steelers 17.

So, that's my spiel. I have a lot of risky picks in there, and a lot of seemingly easy picks in there. Time will tell which ones are right and wrong.
Posted by Jordan at 12:17 PM