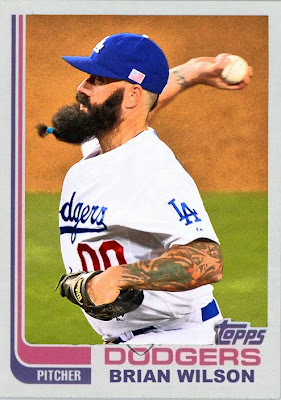 Not just Brian Wilson. Although Brian Wilson is pretty weird by himself. No, what's weird is that he's playing for the Dodgers, and he's going back to the postseason with his old team's rival.

I mean...look at this custom. HIS BEARD HAS A SCRUNCHIE! Think about this for a second. His beard has gotten so out of hand that he needs a hair tie to attempt to compose this madness. It's failing miserably.

I feel like he's channeling a bunch of other closers who were popular in 2010. Like, he shared a bullpen with Brandon League, and his tats remind me of Jon Rauch's. Plus, this turncoat-ness is almost reminiscent of Papelbon.

Still, I'm glad Brian Wilson's back, as I look forward to watching this madness go on for a little while longer.

Coming Tomorrow- The hottest middle reliever in baseball.
Posted by Jordan at 6:29 PM